Webber takes over as head of GM Russia 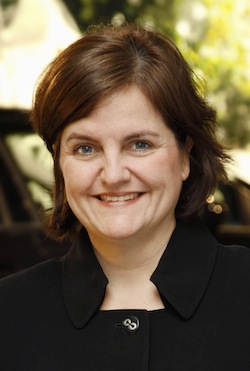 General Motors has announced that Susanna Webber, vice-president of global purchasing and supply chain Europe for the last four years, is being appointed president and managing director of GM Russia with immediate effect. Her appointment is part of a restructuring of GM’s Russian operations that will include reduced production and a push for more parts localisation.

Andy Dunstan, who was previously the carmaker's managing director in Russia, has been appointed vice-president of sales and aftersales.

The carmaker will reduce its production at its St Petersburg plant, which makes the Opel Astra and Chevrolet Cruze, down from two shifts to one because of a drop in demand in the Russian market. GM will also increase its local purchasing of parts to 60% to alleviate cost pressures, it said in a statement. The carmaker will offer separation packages to workers.

GM has a joint venture in Russia with Avtovaz to build Chevrolet vehicles in Togliatti. The next generation Niva will be launched as planned.

Webber’s considerable experience in purchasing and supply chain is expected to be put to the test in the new role. Prior to her last position she was executive director for global logistics, taking over the top logistics job shortly after the company emerged from bankruptcy. She was largely credited with helping to restore relations with many logistics provider, including bring providers onto GM’s supplier councils. She also helped the company to consider logistics and supply chain risk further in its ‘total enterprise cost’ calculations (read more here).

Since taking over the job in Europe in 2010, Webber has also overseen the carmaker during a difficult time. After the company closed its plant in Belgium in 2010, it is in the process of closing another plant in Bochum, Germany. However, the carmaker has begun to see its sales and finances stabilise in Europe. On the supply chain side, it has made considerable progress, including the introduction of a new order management and forecasting system.

Webber is also said to have played an important role in GM’s deal with PSA to outsource most of its logistics management to Gefco, which took over operations as ‘4PL’ last year (read the latest on the project here).

Webber’s successor in her previous role will be Katherine Worthen, who moves from her role as GM executive director of chassis systems for global purchasing and supply chain.

The Russian economy is suffering a slowdown and a 15% drop in the value of the rouble against the dollar. In the first eight months of 2014, new vehicle registrations in Russia declined 12.1%. As US and EU sanctions escalate against the country for its role in the Ukraine crisis, the Russian government has also threatened to limit or ban the import of western vehicles.

GM’s Russian division sells the Opel, Chevrolet and Cadillac brands in Russia. GM’s European operations took over responsibility for the business in Russia in January 2014 from GM International Operations. Since then the carmaker has seen its market share in the country fall to 7.8% in the first eight months of the year, down from 9% over the same period in 2013. GM’s sales in Russia are down more than 24% in the first eight months of 2014 compared to 2013, to 125,000 vehicles.

“In 2013, Russia was our third biggest market behind the United Kingdom and Germany and is currently facing serious turbulences,” said Dr. Karl-Thomas Neumann, chairman of the Management Board of Opel Group. “While we believe in the long term potential of Russia, there is significant immediate pressure on sales volumes and pricing while the rouble is deteriorating further. Since this is impacting our Opel Group business results and will continue to for the remainder of the year, we are taking measures now to limit our risk and stay on course.”

Webber started her career with GM in 1997 and has held various positions in purchasing, supply chain and cost management. In 2010, Webber was made responsible for Purchasing and Supply Chain in Europe. She was appointed a Management Board member of Adam Opel in January 2011 and became a member of the Management Board of Opel Group in July 2014.