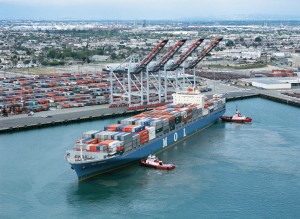 [This article was updated on the 14 November] Congestion at the US West Coast ports of Los Angeles and Long Beach is risking delays to the inbound delivery automotive parts to the country’s carmakers. The throughput of containers is being hampered by a number of factors including an on-going labour dispute involving port workers, the greater demands in terms of volume, time and complexity of unloading bigger ships and a shortage of rail capacity to handle the higher volumes within certain times. Added to this there are terminal gate turn-time problems and gaps in port chassis provisioning, as well as a shortage of truck drivers.

“The port of LA has been working around the clock to address these problems,” a spokesperson for the port told Automotive Logistics. “We recently brought chassis operators to the table and helped facilitate a so-called gray chassis pool. We are offering up port land to the private terminal operators as spillover space for cargo [and] there are a number of other ways we are working with the stakeholders to address the issues in the supply chain.”

Amongst those other ways are efforts to look at smarter cargo stowage at the port and better cooperation between the port and the vessel owners and terminal operators. The port is also looking at improved drayage operations and on-dock rail options for faster distribution.

Between half and two-thirds of the automotive parts that come from outside the US are brought in from Canada and Mexico. Of that volume 44% come through the ports of LA and Long Beach. Tacoma, and to a lesser extent Seattle and Oakland account for another 10%

A spokesperson for the port of Long Beach confirmed that all of it is being slowed by the congestion with delays of up to two weeks and beyond.

Meanwhile, the dispute between the Pacific Maritime Association (PMC) and the International Longshore and Warehouse Union (ILWU) over renewal of contracts for port workers is now in its fourth month and has spread from the ports of Los Angeles and Long Beach to affect the ports of Oakland, Seattle and Tacoma. Longshore workers on the West Coast have been without a contract since July but have continued to work though there have been accusations of workers deliberately slowing down their activity, something refuted by the ILWU.

This is seen as the major problem because without a new contract there are not enough workers to deploy to solve the build up of cargo.

“Our executive director, Gene Seroka, has been urging the longshore workers and the terminal operators to sign a labour contract,” said the LA port spokesperson. The swift resolution to that situation will allow both labour and management to focus on helping to solve the key issues related to congestion.”

Rumours that the ports of LA and Long Beach were facing a shutdown because of the dispute were not backed up by the port.

“While the situation has slowed work at the port, we have not seen any evidence that suggests a port shutdown is on the horizon,” continued the spokesperson. “Both sides continue to negotiate in good faith.”

The impact on the movement of finished vehicles remains unclear though Wallenius Wilhelmsen Logistics (WWL), which calls at the port of LA, said that its services remained largely unaffected.

"Regarding the labor negotiations, WWL is cautiously optimistic that the continued negotiations will be resolved without disruption to ro-ro port operations,” said a spokesperson for the logistics provider.