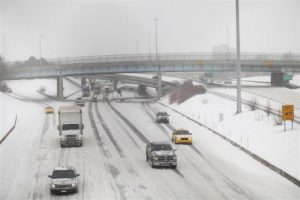 Threats of the level of disruption experienced by the US automotive sector last winter were renewed last week, with record snow and low temperatures coming early to all 50 states.

The northeast of the US was hit particularly hard when massive snowfall put some dealers in Buffalo, NY, under seven feet of snow. Dealers across the northeast were affected by the adverse weather conditions and some are still digging out their lots.

On the inbound side, Ford was forced to close its Buffalo Stamping Plant last weekend because parts deliveries could not be made, though production is now back to normal.

There are further warnings of adverse conditions in the region over the Thanksgiving break. Local news source The Buffalo News has warned of winter storms this week in the region east of Utica to Albany, and New York City, with commercial vehicles banned on the I-87 in both directions, and restrictions on the I-84. Significant snow is expected from the central Appalachians into inland parts of the northeast.

Rail provider Norfolk Southern reported that operations had been impacted by extreme weather conditions around Buffalo and further disruption was expected.

“Customers with rail traffic destined to or originating in the Buffalo area will see a disruption of service over the next few days,” said the rail provider in a statement. “Shipments normally moving through western New York will be detoured over other routes, likely resulting in additional transit time with 24-48 hour delays.”

Road and rail providers have announced a number of measures to mitigate the impact of the winter conditions on intermodal operations.

Schneider announced that it had increased the number of containers by 25%, to create a supplemental fleet ready for deployment in the event of serious disruption. It also said it had expanded “plug-in capabilities” at cold weather locations, along with “start support plans” at all locations to ensure trucks could keep moving.

Canadian rail provider CSX, meanwhile, has increased its locomotive count by more than 375 compared to last year, and added Chicago Gateway options and Selkirk starting tracks to reduce Northern Territory congestion and transit delays, among a range of other measures.

North America was hit with severe disruption because of the winter weather last year, with a number of automotive production facilities forced to close because of supply and staffing problems.