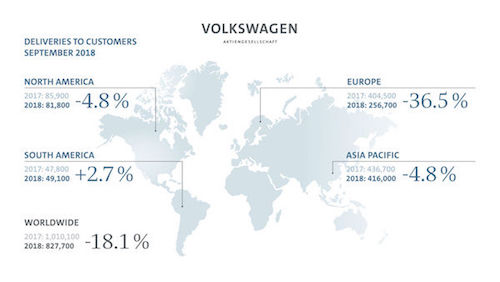 German automotive industry association, the VDA, said the volatility was because of distortions caused by the new Worldwide Light-Duty Vehicles Test Procedure (WLTP), which is intended to achieve more accurate monitoring of emissions from passenger cars.

“After the strong registration figures in August, we expected this movement in the opposite direction,” said association president Bernhard Mattes.

Earlier this year, the Association of European Vehicle Logistics (ECG) warned that WLTP could disrupt logistics involving the storage and delivery of new vehicles.

The association pointed out that the figures were also affected by one less working day in September, as well as the switch to WLTP.

The variance has led to problems finding capacity on outbound transport. The sudden escalation in sales had an impact on finished vehicle logistics providers in Europe, with high levels of congestion reported at terminals and ports. The increase in deliveries that have been approved throughout November and December will also test capacity.

Germany’s DB Cargo said there had been a high demand on rail wagon capacity, longer lead times on delivery and “sub-optimal use of equipment” which led to cancellations.

Meanwhile, BLG Logistics, also based in Germany, said that over the course of the year it had increasingly noticed the impact of the various preparations made by manufacturers on services.

Despite the September dip, the VDA said passenger car registrations in Germany for 2018 were still higher in the first nine months at 2.67m, an increase of 2% on the corresponding period of 2017.

Group sales chief Christian Dahlheim said: “As expected, we delivered considerably fewer vehicles in September due to the WLTP changeover. This will continue to impact deliveries in Europe in October, and we expect November and December to be stronger months in this region.”

Mercedes-Benz reported an 8.2% year-on-year decline in September’s worldwide sales to 202,800 units. The nine-month tally was little different year-on-year at 1.715m

“Mercedes-Benz certified its entire fleet for Europe according to the WLTP standard with effect as of September 1,” it said. “Certified vehicles are already on their way to the retailers, but despite the ongoing strong demand, it was not possible to fulfil all customers’ wishes in September.”

Sales were also impacted by delays in certification in some international markets and by model changes, the group added.

BMW’s worldwide deliveries in September decreased 0.8% to 237,800 as, it said, the company continued to follow a policy of prioritising profitable growth. The month was also affected by intense competition in Europe, added BMW, which has warned financial markets that it expects this year earnings to be lower than first anticipated.

Pieter Nota, management board member responsible for sales, accepted the WLTP testing procedure distorted the market in the third quarter. “As we planned well ahead for the WLTP changeover, virtually all our current models are WLTP type-approved,” he added.