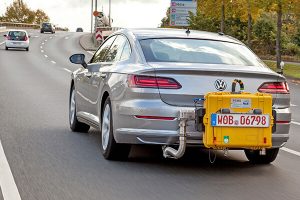 In its latest financial results for the first nine months of the year, VW Group reported operating profit for Volkswagen Passenger Cars down 6.8% to €2.33 billion ($2.65 billion), blaming this in part on the move to the WLTP. Operating profit was also sapped, however, by higher distribution expenses, exchange rate variations and expenditure for new products, especially electric vehicles. The operating profit figure excludes special items, however, such as payments of €1.6 billion related to the diesel emissions scandal.

The group’s Audi brand, which includes the Lamborghini and Ducati marques, also posted a 6.8% decline in operating profit to €3.67 billion, which the group put down partly to “restrictions in the sales portfolio” caused by the WLTP changeover. Also contributing to the fall, however, was “the densely packed programme of phase-outs and ramp-ups in connection with the broadest model initiative in Audi’s history [reaching] its peak with high ramp-up costs in the second half of the year”, it said. Audi also had to pay €800m for its role in the diesel emissions scandal.

Volkswagen Commercial Vehicles, meanwhile, experienced a 9.2% fall in sales to 337,00 units in January-September, a 3.9% decline in revenue to €8.57 billion and 10% drop in operating profit to €6.28 billion. The company put the profit drop down to “challenges presented by the WLTP” and an unfavourable exchange rate.

Elsewhere, German auto part manufacturer Schaeffler has recently lowered its revenue expectations for this year against a background of increasing market volatility caused by WLTP and trade conflicts, as well as deterioration of market conditions in its automotive OEM business in China and weaker than expected Q3 sales in the aftermarket.

The group now expects turnover to grow by 4-5% this year, compared to its previous forecast of 5-6%. Last year’s sales revenue was €14 billion.

Not the firstVW and Schaeffler are not the first to have cited the WLTP as a factor in their financial performance. In early October, BMW warned the financial markets that the WLTP, product recalls and trade wars had left it expecting a poorer financial performance this year, with automotive segment revenues predicted to be slightly lower than last year’s €88.6 billion.

Later that month, German automotive industry association the VDA also cited the WLTP as a factor in a 31% fall in year-on-year new passenger car registrations in Germany to an estimated 200,100 in September.

Back in August, meanwhile, Thomas Zahn, head of sales and marketing in Germany for Volkswagen, predicted the transition to WLTP would lead to delayed delivery times – in some cases by months, rather than weeks.

Though the OEM has been producing vehicles that comply with the new requirements since early August, they have had to wait for approval by the authorities. The group subsequently reported sales in Western Europe down 41.5% year-on-year to 199,600 units in September.