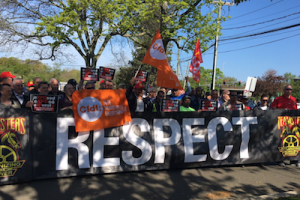 XPO Logistics has been accused of “mismanaging the integration of its new businesses” by the international Teamsters union, which is helping to organise a protest by workers from both the US and Europe outside the company’s shareholder meeting in Greenwich, Connecticut today (May 11th).

XPO has so far not issued any response to the accusations or answered requests for comment.

The accusations of mismanagement follow a spate of takeovers and subsequent layoffs that XPO has made over the past couple of years, including that of Con-way in the US and Norbert Dentressangle in France. A delegation of workers and trade union representatives is calling for a meeting with XPO Logistics’ CEO, Bradley Jacobs, to discuss workers’ issues.

In a statement released ahead of the shareholders’ meeting in Greenwich, the International Brotherhood of Teamsters, a labour union formed by the merger of several local and regional branches, said XPO’s integration of new businesses had “created significant operational and financial risk for the company and its investors”. Moreover, it said XPO was “mistreating former Con-way workers with terminal closures, subcontracting and layoffs, along with refusing to bargain in good faith”.

"We applaud today's action in Greenwich,” said Steve Cotton, general secretary of the International Transport Workers Federation (ITF). “This event is the first time that a new network of concerned workers has taken action on XPO. The company has to listen. The company has to talk."

Likewise, it said that the logistics provider had broken promises to not lay off any workers for at least 18 months after the purchase of Norbert Dentressangle.

When XPO took over Norbert Dentressangle last year, it said it did not intend to reduce the total number of full-time employees in France for a period of at least 18 months.

The French trade union CFDT took strike action over the same matter in April this year.