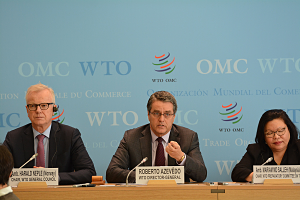 A World Trade Organization (WTO) agreement supporting simpler and clearer procedures when it comes to imports and exports of goods came into force this week after the requisite amount of member countries agreed to implement it.

Spread out over 12 articles, the Trade Facilitation Agreement (TFA) prescribes many measures to improve transparency and predictability of trading across borders and to create a less discriminatory business environment.

Last week, Chad, Jordan, Oman and Rwanda became the latest states to sign on to TFA resulting in it surpassing the predetermined threshold of 110, or two-thirds of members required.

The WTO estimates a full implementation of the TFA would cut members’ trade costs by an average of 14.3%. Additionally, by 2030 it could add 2.7% per year to world trade growth and 0.5% to world GDP growth.

In terms of time gains, the aim of the TFA is to reduce the time needed to import goods by over a day and a half and to export goods by almost two days, representing reductions of 47% and 91% respectively over current averages.

According to the global trade body, its impact would be greater than the elimination of all existing tariffs around the world.

“By ratifying the agreement, WTO members have shown their commitment to the multilateral trading system. They have followed through on the promises made when this deal was struck in Bali just over three years ago,” said WTO director general Roberto Azevëdo (pictured, centre).

The TFA's provisions include improvements to the availability and publication of information about cross-border procedures and practices, improved appeal rights for traders, reduced fees and formalities connected with the import/export of goods, faster clearance procedures and enhanced conditions for freedom of transit for goods.

The agreement also contains measures for effective cooperation between customs and other authorities on trade facilitation and customs compliance issues.

Developed countries have committed to immediately implement the agreement. Developing countries, in comparison, will immediately apply only the TFA provisions they have designated as Category A commitments.

For the other provisions, they must indicate when these will be implemented and what capacity building support is needed to help them implement these provisions, known as Category B and C commitments.

The British International Freight Association (BIFA) welcomed the news and used the opportunity to highlight the benefits of liberalised global trade.

“Not only has consumer choice been enriched in many countries, but also out-sourcing of production has brought valuable employment to developing economies throughout the world. BIFA members have worked to bring these products to the UK and taken UK production to customers abroad.

“Of course, of late, some nations have made it clear that they intend to scale down multi-country free trade deals and switch to bilateral relationships, marking a return to the bad old days of protectionism.”