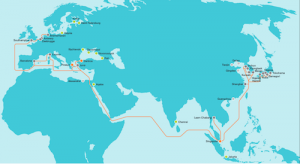 Wallenius Wilhelmsen Logistics (WWL) has added the Russian port of Novorossiysk, on the Black Sea, to its service from Asia to Europe, the first deep-sea ro-ro carrier to provide access to the port according to the company. The service has feeder operators from two of WWL’s Mediterranean ports on the Asia-Europe route: Derince in Turkey and the Greek port of Pireaus, for onward transshipment of cargo to Novorossiysk.

WWL said it would be handling various types of rolling and tracked equipment on the service, as well as static and project cargo.

“Novorossiysk presents, due to its location, a direct entry into the Russian Black Sea region and is closer to markets in the south-western part of Russia than St Petersburg,” said the company in a statement. “This makes Novorossiysk a good supplementary option, saving costs and transportation time for customers sending cargo to south-west Russia and other areas around the Caspian Sea.”

WWL will also provide inland transport services by truck and rail from the Russian port via a subcontracted local forwarder.

“As we did not have any Russian entry port in the Black Sea region before and only shipped into that region via Ukraine or Georgia, Novorossiysk represents a direct access to the Russian Black Sea region,” a spokesperson for the company confirmed to Automotive Logistics.

Asked whether restrictions to access through ports in southern Ukraine had necessitated the service, the spokesperson said its decision to call at Novorossiysk was not related to the current political situation but mainly because the port was a convenient location for customers with cargo going to south-western Russia and other areas around the Caspian Sea; services for which it has received several requests in the past.

“[Previously] the local settings did not fulfill our requirements and standards as we could not offer a stable service,” said the spokesperson. “However, this has changed and WWL Russia has been working on solutions so that we are now glad to include Novorossiysk in our service offerings and become the first in the deep sea ro-ro business offering this additional port of entry with a consistent inland transportation.”

She added that Novorossiysk also offers the advantage of being an ice free port in winter and therefore can be served during that time of the year without facing weather-related delays.

WWL has plans to include breakbulk shipments from Japan on the service.