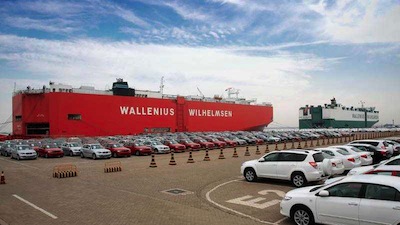 Wallenius Wilhelmsen Logistics has introduced a new sulphur policy governing the emissions from its ocean vessels, limiting the sulphur content of its fuel when at berth to less than 0.1% across all ports visited globally. The company is using marine gas oil and abatement – or scrubber – technology, to remove the level of pollution.

While the sulphur content of marine fuel is now limited to 0.1% in emission control areas (SECAs) by North American and European Union legislation, and the efforts of the International Maritime Organisation (IMO), is it not at other ports around the world. According to WWL, 49 of the company’s 79 main trading ports lie outside the SECAs, as do 23 out of 24 ports WWL transports good to occasionally.

WWL has operated with a voluntary policy limiting the average sulphur content in fuel to 1.5% over the past 11 years, against the industry average, which is currently between 2.7% and 3.5%. However, the company acknowledged that recent research has ever more clearly shown its negative effect on human health, and its link to respiratory and cardiac diseases.

“Human life is worth the same everywhere,” said WWL’s global head of sustainability, Anna Larsson. “If WWL can follow a <0.1% sulphur limit at berth in one part of the world, we can adhere to the same in all ports. This way, we can significantly reduce WWL’s impact on human health and environment where it matters the most.”