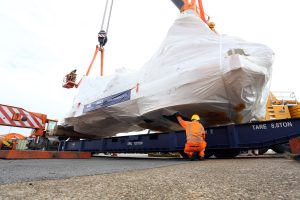 WWL’s Abnormal Loads Services division has recently made a couple of substantial construction equipment moves to South Africa from France and China.

In the first move the division moved an 810-tonne mining excavator from Leibherr’s factory in Colmar to its destination in Durban for the mining company Kumba Iron Ore. The R900 excavator was moved in sections, with the largest measuring 11 metres long and weighing more than 100 tonnes.

It was moved on a multimodal route, first by road to the river port in Strasbourg. From there the equipment was taken by barge to Zeebrugge port and loaded onto WWL’s ro-ro vessel Tortugas for the ocean voyage to South Africa’s port of Durban. The journey was coordinated by the WWL ALS team in Moerdijk, Netherlands.

The machines were shipped via the port of Shanghai, again to the port of Durban in South Africa, for delivery to Zoomlion’s Boksburg depot near Johannesburg, an overland route of 600kms.