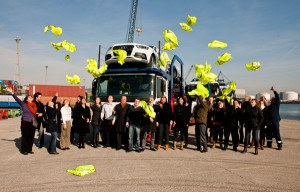 Wallenius Wilhelmsen Logistics (WWL) has opened a branch office in Barcelona to support the development of its business in the Iberian region.

It will be headed by Ramon Oliete, formerly head of WWL’s agency in Barcelona – Agencia Maritima Espanola Evge – which has been operating there since 1987. The core eight-person team from Evge has transferred into the new branch. Evge will remain WWL’s managing agent for Spain and continue as WWL’s agent in Greece and Turkey.

Since 1999, WWL has also operated an inland transport company in Barcelona, delivering trucking and other inland transport services. According to the company the new Iberia branch office will integrate and further develop WWL’s existing land-based and ocean logistics services to the Iberian market, creating multimodal service solutions.

“Spain and Portugal have been suffering from the economic downturn in Europe over the past few years,” said Erik Noeklebye, head of Region Europe. “However, a more recent trend is that auto and equipment companies have relocated production to Spain, resulting in increased export and demand for logistics services.”

“We also expect the Spanish economy to pick up, and with growing purchasing power to see a corresponding growth in imports,” said Noeklebye. “When a market grows to this extent we ramp up our services to support our customers’ logistics needs both on the ocean and on land."