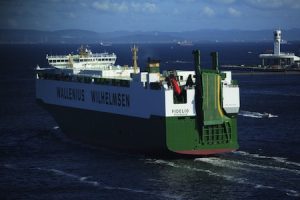 The crew of a car carrier operated by Wallenius Wilhelmsen Logistics (WWL) have rescued a yachtsman adrift off the north-east coast of New Zealand.

The MV Fidelio was diverted 370km from its route to the port of Auckland on Monday (April 7) following a distress signal sent to the Rescue Coordination Centre New Zealand (RCCNZ) by the Canadian sailor, whose vessel was in danger of sinking in rough seas 2,300km north-east of the port.

The craft had been damaged in a storm the previous week and the sole yachtsman was reported to be bailing water from the vessel by hand.

Working in conjunction with a Royal New Zealand Air Force Orion aircraft the crew of the Wallenius vessel was able to locate the 11-metre single-masted yacht shortly before 11pm. The yachtsman was then able to climb aboard the Fidelio despite three metre swells and 25-knot winds.

“The crew onboard Fidelio had radio contact with the yachtsman and could therefore plan the rescue operation together with him,” said Wallenius in a statement. “As the yacht still had motor power, it could be maneuvered alongside Fidelio. After some two hours, the Canadian yachtsman could safely climb up the pilot ladder.”

“We are of course very grateful that this search and rescue operation went well,” said Peter Jodin, DPA Wallenius Marine. “We are very proud of our crew onboard the Fidelio who showed proof of really good seamanship.”

Quoted on the website of safety organisation Maritime New Zealand, RCCNZ Search and Rescue Mission Coordinator Dave Wilson said the skipper was heading home to Canada when the yacht was hit by a storm five days ago.

“There was no question the skipper was in serious danger,” said Wilson. “The crew of the Orion did a great job finding the yacht, and it was an amazing effort from the master and crew of the Fidelio to rescue the skipper at night, in high winds and rough seas. The sailor received superficial facial injuries when his vessel rolled and these have been treated aboard the Fidelio."

WWL reported that the vessel was only slightly delayed and arrived in Auckland at around 8pm on Thursday.

The RCCNZ presented the captain and crew of the Fidelio with a plaque and letter of appreciation when they were in Auckland.