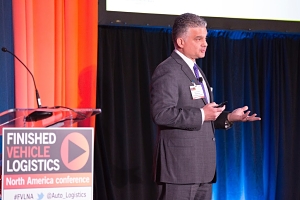 Work on the Canton study has already begun, according to John Felitto, president of WWL Vehicle Services Americas, which operates Nissan's plant and distribution centre yards in North America. Surgere, which up to now has done more work in the inbound automotive supply chain including RFID for packaging, has already mapped the entire facility, including 6,000 bays with GPS co-ordinates.

Nissan's Canton plant built more than 360,000 vehicles last year according to the Automotive News Data Center, including the Altima sedan, the Frontier, Murano and Titan truck, and NV van.

All vehicles are fitted with passive RFID tags, which is cheaper and smaller because it has no battery, said Felitto, speaking at the Finished Vehicle Logistics North America conference.

“We will then be able to scan all the units in and out of the facility, and we will be able to take inventory using a scanner,” he said.

In the future he said the scanning process could become more automated but for now it would still be manual.

“Right now we still need a human walking down the aisles, but this is much, much faster and much more efficient than what we have been doing,” he said.

WWL is making the bulk of the investments in the project, including the tags, readers and system that Surgere provides, with Nissan making changes at the plant to accommodate the system.

“We're sharing it, and I think we need to do that, because it is a technology that is going to bring efficiency to both sides,” said Felitto. He declined to specify an investment amount or specific the expected return on investment, although he did it admit that WWL and Nissan accepted that the project "would take time" to reap the full benefits.

Felitto indicated that the technology could be rolled out to further WWL-run facilities in North America. “We are looking at things like RFID to keep track of those 5m-plus cars that we manage every year at plants and ports,” said .

“It is not an easy thing, although you think it would be. It's a technology that has been used in parts and by the small package guys, but we are trying to move it forward.”

RFID technology has been discussed in the automotive logistics industry for nearly two decades, although its application has remained relatively limited for vehicle logistics. Last year, UK finished vehicle logistics provider Paragon Automotive announced that it too had rolled out an RFID system at the car handling facility it manages near the port of Immingham. Paragon uses the technology to track Kia vehicles through the 35-hectare facility in Stallingborough, outside Grimsby. In 2015, Opel/Vauxhall started using passive RFID tags to monitor its vehicle yard at its plant in Eisenach, Germany.