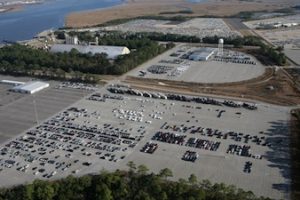 Wallenius Wilhelmsen Logistics (WWL) is adding 8 hectares of newly developed land to its vehicle services operations (WWL Atlantic Vehicle Processors) at the US port of Brunswick. Once completed, the company’s footprint at the port will cover 36.5 hectares on the Colonel’s Island ro-ro terminal.

A spokesperson for WWL said the space would be used to accommodate additional vehicle storage needs during peak volume periods. Last year, WWL handled more than 90,000 vehicles through the port, including for Subaru.

Brunswick port operator Georgia Ports Authority (GPA) said last year that it would invest $152m in improving facilities there, including a fourth berth for ro-ro cargo at Colonel’s Island. Construction on the new berth will begin this year.

Along with WWL there are three other automotive terminal operators at Brunswick: Amports, IAP and Mercedes-Benz.