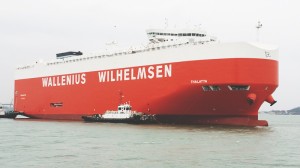 Wallenius Wilhelmsen Logistics (WWL) has launched its second post-panamax vessel, which has capacity for 8,000 car equivalent units (CEUs). Called the Thalatta, the vessel is described by WWL as a High Efficiency RoRo (HERO) vessel and joins the Thermopylae, which was launched in December last year. WWL is introducing eight such vessels into service over the next three years.

As with the Thermopylae, the Thalatta measures almost 200 metres long, 36.5 metres wide and features five liftable car decks, allowing for multiple configurations and a variety of customer cargo. The Thalatta will be employed on the Asia-Europe trade route for her maiden voyage. Loading started on 17 April in Kunsan, South Korea.

The vessel is fitted with an exhaust gas cleaning system that reduces sulphur emissions to below 0.1 per cent in compliance with SECA regulations and removes 70% of particulate matter, which also significantly reduces nitrogen oxide emissions.

As with Thermopylae, the Thalatta was built at the Hyundai Samho Heavy Industries shipyard in Mokpo, South Korea.