WWL opens third VPC in China; starts work on another in US 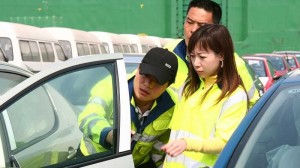 Wallenius Wilhelmsen Logistics has opened a vehicle processing centre (VPC) at the port of Tianjin in China, its third such facility in the country. The latest facility, which is a joint venture with the Tianjin Port Group, provides 140,000 sq.m of storage and a 6,000 sq. m workshop, which will provide for PDI, washing and repair services.

The company has existing VPC’s in Shanghai and Guangzhou. The addition of the third at Tianjin, which is the second largest vehicle import and export port behind Shanghai, means WWL has facilities at three of the major automotive ports in China.

Tianjin Port Wallenius Wilhelmsen Vehicle Logistics, as the venture is called, will handle both passenger cars and trucks. The facility, located on the East Port at Tianjin, will also provide port inspection, customs clearance and vehicle shuttling, as well as storage of bonded and duty paid vehicles.

Tianjin is a key hub in China with shipping connections to large parts of Asia, along with continuously improving road and rail links to the nearby capital, Beijing, and the rest of Northern China.

According to WWL, Tianjin Port is the highest grade artificial port in the world and the main hub connecting Northeast Asia with Central and West Asia. It enjoys trade relations with more than 500 ports in over 180 countries and regions, serving 14 provinces, municipalities and autonomous regions that cover 52% of China’s vast territory.

Tianjin port has two ro-ro terminals and is located within the bonded port of Dongjiang free trade zone, which means duty payments can be withheld until the product leaves the free trade zone.

Galveston VPC
In other news, WWL Vehicle Services Americas (WWL VSA), which provides vehicle processing and logistics services to the North American market, has started work on a new vehicle processing centre (VPC) at the port of Galveston in Texas.

The facility will cover eight hectares and provide full technical services and body shop work, storage and inspections for up to 32,500 cars per year.

The VPC will be adjacent to WWL’s equipment processing centre at the port, which has served the import, processing and storage needs of high and heavy equipment makers since 2011.