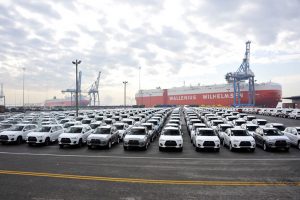 Wallenius Wilhelmsen Logistics (WWL) has become the fourth car carrier confirmed to have been fined by the US Department of Justice (DoJ) in relation to price-fixing on international ro-ro services between 2000 and 2009, following an investigation that began in 2012.

The Norwegian ocean services provider has agreed to plead guilty and pay a fine of $98.9m for its involvement and that of its sister company, Eukor Car Carriers, in the conspiracy to fix ro-ro prices on routes from the port of Baltimore, according to the DoJ.

Mitsui OSK Lines (MOL), meanwhile, is also reported to have paid a fine last August in relation to the investigation, though the details have been hard to establish as the DoJ has refused to comment on that particular company. However, it has been clear on the status of the other companies.

“WWL and its co-conspirators cheated their customers for years by fixing the prices of ocean shipping services for cars, trucks and other cargo essential to our nation’s economy,” said principal deputy assistant attorney General Renata Hesse, head of the Justice Department’s Antitrust Division, about the WWL fine. “The Antitrust Division, working together with our law enforcement colleagues, will continue to hold the ocean shipping companies and executives who perpetrated this scheme accountable for their crimes.”

The companies are all charged with conspiring to agree on prices, allocating customers, agreeing to refrain from bidding against one another and exchanging customer pricing information.

Eight executives have been charged separately for their participation in the conspiracy, said the DoJ, with four – two from NYK, one from K-Line and one from CSAV – already pleading guilty and receiving prison terms. The other four, it said, remained “fugitives from justice”.

The DoJ’s pursuit of the firms follows similar action undertaken in 2012 by the Japan Fair Trade Commission.

“It is with great regret that I conclude that our policies were not always followed as they should have been,” said Håkan Larsson, chairman of the board at WWL and a board member at Eukor, about the DoJ fine. “We have supported this investigation throughout and, whilst it is a sad day, I am pleased to have reached this settlement with the DoJ.

“We will continue our work to meet the highest ethical standards,” he added. “It is what we owe our customers, as well as ourselves.”

Since the investigation, WWL has outlined a number of moves to strengthen its competition compliance process and procedures, including the appointment of a global compliance officer to oversee and manage regulatory compliance issues and a number of compliance managers for its respective divisions and in all main markets.

In related news, NYK has this week pleaded guilty to violations of Australia’s competition and consumer law, following an investigation by the Australian Competition and Consumer Commission relating to the transport of vehicles into the country between 2009 and 2012. A hearing on the matter will take place on September 12th.