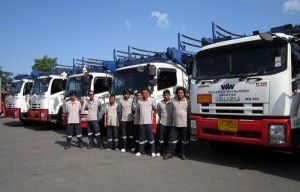 Wallenius Wilhelmsen Logistics (WWL) has revealed that it is bringing its sales and customer service operations in Thailand in house to “better coordinate its business in a growing market”. Those functions have been handled by Wilhelmsen Ship Service (WSS) for the past two decades. WWL said that the move should not affect day-to-day relations with WWL’s customers as the team will remain the same.

Sunee Phansatitwong, who was responsible for the WWL sales at WSS, has now joined WWL as general manager, Commercial, in Thailand.

“Me and my team have now become part of a wider logistics team, offering all aspects of logistics from factory to dealer,” said Phansatitwong. “We are naturally very pleased to continue supporting our customers in the region.”

WWL said that the decision to change the structure of the business was driven by market changes underway in the country, which included the fact that carmakers were flocking to Thailand, while domestic producers were expanding production.

Trond Tønjum, vice president and head of South East Asia for WWL, noted two main factors influencing the development of the logistics business in the country. The first is better trade ties, in part influenced by New Asian Economic Community (AEC) agreements underway, which are expected to ease exports between South East Asian markets; and the second is automotive production capacity growth. Automotive exports are expected to almost double during the next three to four years, from about 1.2m to 2.2m vehicles, the company said.

“With AEC coming into effect from January 2016, we expect cross border trade to increase,” said Tønjum. “Thailand will become a natural production hub and a transit country for most of South East Asia, including Myanmar, Laos, Cambodia, and Vietnam.”

The change in business structure is also intended to bring efficiency gains and open up development of WWL’s business beyond ocean logistics.

“Thailand is now joining the ranks of global production hubs like Mexico, South Africa and others as a major exporter for auto makers,” said Tønjum. “We now expect the exports from Thailand to go beyond South East Asia to Europe, Australia and North America, and we are ready to offer our services, expertise and support.”