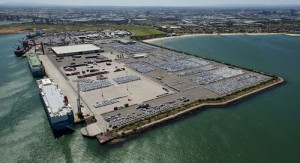 [This story was updated on 4 July 2014] Wallenius Wilhelmsen Logistics (WWL) has won the bid to operate the new Webb Dock automotive terminal at the port of Melbourne in Australia following the submission of a bid back in 2013. The company will operate through its subsidiary Melbourne International Ro-Ro Automotive Terminal (Mirrat).

Earlier this in year, in February, it was announced that WWL and Australian Amalgamated Terminals were the two finalists in the tender process.

“We are delighted for Mirrat to be afforded this opportunity in Melbourne, and look forward to developing a terminal that all stakeholders, meaning the Port, vessel operators, car and equipment importers, and the community can all take pride in,” says Christopher Connor, president and CEO of WWL.

The construction of the terminal will begin in late 2014 and once operational, will have the capacity to handle up to a million units per year. It will take place in two phases, starting later this year. Phase one will be the construction of a new 185,000-sq.m facility north of the current Webb Dock West car terminal, due to be completed early 2016. Phase two will be the incorporation of the current automotive terminal at the south end of Webb Dock West from 1 January, 2018. The facility will also include a 8,000-sq.m fully enclosed and weather proof cargo storage area, a maintenance area and truck parking facilities. A vehicle appointment system will ensure good traffic flow in and out of the facility, as well as minimise the impact on surrounding road infrastructure.

WWL already has a $19m technical services centre approximately 15km from Webb Dock West, which it opened in 2008 to support its increase in ro-ro activity in the Oceania region.

The company carries more than 100,000 cars, agricultural units and industrial units to and from Australia every year, making 400 port calls.

The port of Melbourne is investing AUS$400m ($411m) to expand its vehicle terminal at the West Webb Dock and add on-site, pre-delivery inspection (PDI) facilities. It is the largest commitment to an automotive terminal in Australia.

A proposal to move automotive ro-ro trade to the neighbouring Victorian port of Geelong, about 70km south west of Melbourne, was rejected in 2012 because of opposition by automotive stakeholders and a lack of suitable land.