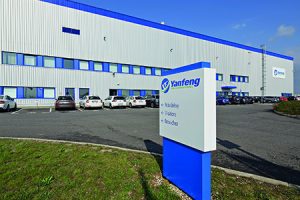 Yanfeng Automotive Interiors is setting up a new 20,000 sq.m interiors production plant in the Czech Republic.

Construction of the new plant at Planá nad Luznici – which will produce car instrument panels and door panels, predominantly for Daimler – will begin in late May, a spokeswoman for the Chinese interiors manufacturer told Automotive Logistics. Production should begin in early 2018 to serve both Eastern and Western European facilities.

The spokeswoman declined to specify the new site’s expected output, however, or the level of investment involved.

The site, located around 100km south of Prague, will create 300 new jobs and will complement Yanfeng’s existing interiors plant in the Czech Republic, at Zatec (pictured), which produces instrument panels and door panels for customers including Daimler, BMW, Volvo, Skoda and Volvo. That plant is itself being expanded with the creation of a fourth production hall that should be ready by the end of this year and will also create 300 new jobs, said the spokeswoman. Construction there began in January.

Jochen Heier, vice-president and general manager for Europe and South Africa at Yanfeng Automotive Interiors, said the new plant in South Bohemia was about “responding to market demand and our customers’ increasing presence in Eastern Europe”.

“The plant will be set up to adapt flexibly to the capacity requirements of Yanfeng Automotive Interiors and its customers and enable the company to respond to continued growth in the automotive market,” he added.