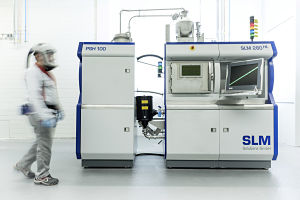 A new report into 3D printing suggests the industry has the potential to redefine manufacturing and supply chain strategies.

The report, 3D Printing and the Future of Supply Chains, was released by global logistics provider DHL and the company says the technology needs to become faster, more agile and more advanced before it can become a core production technology. There are, of course, also issues surrounding warranties, liability and intellectual property.

However, it goes on to recognise 3D printing as a potentially transformative technology having previously recognised it as one of the major disruptive trends to impact the logistics industry in the near future.

“It is not a magic bullet that will render factory mass production and manufacturing obsolete. Its exciting potential lies more in its capability to simplify the production of highly complex and customisable products and spare parts – and this could bring logistics and manufacturing closer together than ever before," said Matthias Heutger, senior vice-president of customer solutions and innovation at DHL.

An Ernst & Young global 3D printing survey revealed that 38% of companies anticipate using the technology in their serial production within five years, according to DHL – but not necessarily to completely replace traditional manufacturing.

“We believe 3D printing will have the most impact in the medium term on logistics in spare parts and individualised parts manufacturing," said DHL in its report.

Mercedes-Benz Trucks is already using the technology, meanwhile, to resolve backlogs in spare parts delivery. The truckmaker will now allow customers to 3D print more than 30 different spare parts for its vehicles.

“Customers no longer have to face a lengthy wait for original factory spare parts to be delivered. Instead they can have the part printed at the nearest facility and delivered in less time,” said the DHL report.

Logistics providers could also play a significant role by achieving economies of scale with the building of networks of shared 3D printers in warehouses and distribution centres around the world.

In September, Ford began working with 3D printing and additive manufacturing provider Stratasys to test and develop automotive-grade 3D printed interior parts, such as side and ceiling panels, instrument panels and centre consoles.