All change in the east as Maure replaces Andersson at Avtovaz 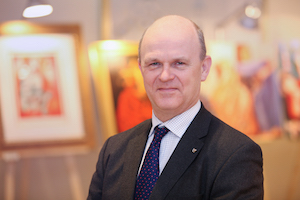 Nicolas Maure (pictured) has been announced as the new chief executive officer of Russian carmaker Avtovaz, following the news that Bo Andersson is stepping down. Maure’s appointment takes effect from April 4th.

Prior to his responsibilities in Romania, Maure was vice-president for powertrain in the Renault-Nissan Alliance Purchasing Organisation (RNAPO). He joined Renault in 2000 and has led teams in manufacturing, purchasing, quality and aftersales.

“Avtovaz has modernised its line-up and manufacturing processes and significantly improved product quality,” said Carlos Ghosn, chairman of Avtovaz and chairman and CEO of the Renault-Nissan Alliance. “With Nicolas Maure, we plan to continue on this strategy despite the short-term challenges; and we remain bullish about the long-term future of the Russian market and Avtovaz as the leading domestic automaker.”

Replacing Maure, Yves Caracatzanis is to become general manager of both Renault Group in Romania and Automobile Dacia. Caracatzanis moves from his role as Renault’s senior vice-president of production and supply chain for the Eurasia region, which he has held since 2013.

Caracatzanis joined Renault in 1992 as logistics organisation project manager before going on to a number of management roles in manufacturing, paintshop, quality and prototype engineering. He was part of the creation of the group’s global supply chain division at the carmakerin 2008 and became senior vice-president of global supply chain in 2010.

Caracatzanis was profiled in Automotive Logistics back in 2011.