AM General begins contract production of Merc R-Class in Indiana 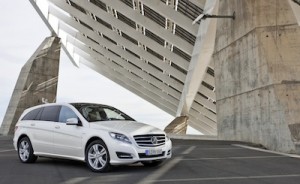 US specialist vehicle maker, AM General, has begun contract production of the Mercedes-Benz R-Class vehicles at its commercial assembly plant in Mishawaka, Indiana. Assembly began officially on Tuesday, August 11th.

Mercedes-Benz US International (MBUSI) signed an agreement with AM General at the beginning of the year making it the first and only contract manufacturer for Mercedes-Benz cars in the US.

Assembly of the R-Class has now shifted from MBUSI’s Tuscaloosa plant in Alabama to AM General’s Indiana facility, though Mercedes-Benz will continue to supply the vehicle bodies, while other components are shipped directly from its suppliers to AM General’s plant.

“We have worked closely with AM General on the inbound logistics processes,” said a spokesperson for MBUSI. “Parts and components in the majority of cases are going directly to AM General from the same suppliers who provided those parts when the vehicle was built in Alabama.”

MBUSI would not divulge how many of the vehicles would be produced at the plant but confirmed that all the vehicles would be for the Chinese market. The Mercedes-Benz R-Class has been offered exclusively in China since 2013 and remains a popular model according to the spokesperson. They are exported through the port of Brunswick.

MBUSI’s Tuscaloosa plant will now make the M-Class, GL-Class and new GLE coupé. Production capacity at the plant is planned to reach more than 300,000 units this year and previous R-Class capacity will be used for the other SUV model lines.

“With the introduction of the new GLE Coupé and the ongoing strong demand for SUVs, Plant Tuscaloosa needs all available production capacities for this segment,” said Jason Hoff, president and CEO of MBUSI, earlier this year.

AM General specialises in military vehicle production and also produced the Hummer under contact with GM when the carmaker bought the brand from AM General in 1998. Production of the Hummer stopped in 2010.