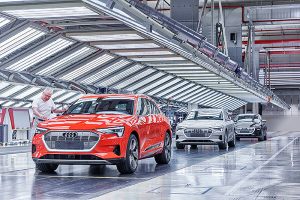 German carmaker Audi has begun working with Belgian materials technology and recycling partner Umicore to investigate the potential for recycling the materials in electric car batteries.

The companies are looking to adopt a closed-loop approach in which valuable elements such as cobalt, nickel and copper from end-of-life batteries are recovered for use in new ones. Initial tests show that more than 95% of some elements can be recovered and reused.

Umicore is carrying out research with the aim of gaining insights into purity of the recovered materials, recycling rates and the economic feasibility of various ideas such as a raw materials bank.

One of the attractions of the project for Audi is that in the longer term, it should help secure the supply of vehicle batteries, with short delivery times between its Brussels assembly plant and Umicore’s research, recycling and storage facilities.

There is no set timeframe for the project, an Audi spokeswoman told Automotive Logistics, because of the many variables involved. Also, as batteries are designed to last the lifetime of the vehicle, they will not be immediately available.

For now, the carmaker is supplying high-voltage batteries from its new e-tron electric car (pictured), which is close to going on sale and is being produced at Brussels. Batteries from other prototype electric vehicles that are at various stages of development will also contribute to the research in due course, said the spokeswoman.

The new initiative follows an existing project under which Umicore has already analysed batteries in the A3 e-tron plug-in hybrid car and defined various ways of recycling.