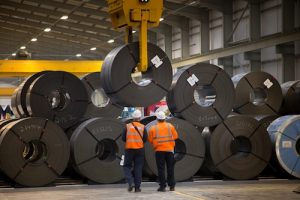 The flow of steel coil into Nissan’s UK plant in Sunderland (NMUK) is under tighter quality and service level control than ever, thanks to a new automotive steel warehouse opened this year by multimodal logistics contractor AV Dawson of Middlesbrough.

AV Dawson is a third-generation family-owned company with logistics assets ranging from specialised road transport fleets to private cranes and wharf facilities on the River Tees. It has subsidiary companies offering services from steel rectification and surface treatment to freight forwarding and shipping brokerage, as well as an extensive industrial park (largely occupied by firms in the North Sea oil and gas sector). Dawson manages logistics flows ranging from fertilisers to deep-sea buoys. However, it is the new warehouse, and its rail links, that have brought benefits to the inbound supply of steel to NMUK.

At a cost of £6.5m ($10.2m), partly supported by the UK government’s Regional Growth Fund, the 9,500 sq.m fully climate-controlled, steel store primarily serves the flow of coil steel from Tata Steel’s facility in South Wales to NMUK. Tata has been closely involved in the design and specification of the facility, which is handling traffic flow that was previously handled through three older and less sophisticated facilities around Dawson’s estate.

Stock controlTata’s contract with NMUK is quite demanding. They are required to hold a minimum of two weeks’ stock, in all grades, gauges and widths at Dawson’s facility to buffer any potential supply problems from mill downtime to transport disruption. Nissan places orders with Dawson 48 hours ahead of need, with confirmation or amendment 24 hours before, for delivery just four hours before the steel is needed on the line (matching the typical press line production cycle). In the event (unlikely, as we shall see) that a coil is rejected, this can be sent back and a new coil despatched in two hours. NMUK’s expectation is that coil received can be fed into production with little more work than removing the restraining bands and any external packaging. The steel is used to build models including the new Qashqai and the Leaf electric vehicle; the new Infiniti will doubtless bring further demands on this supply chain.

Sunderland has already started building the Infiniti Q30 crossover, and next year will build an offshoot, the QX30 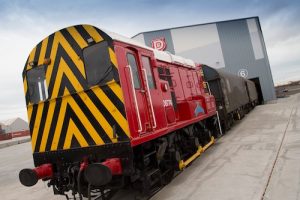 Dawson receives coil into its 300m long warehouse in trainloads of 24 telescopic hood rail wagons. Between three and four trains a week arrive at the facility, carrying some 270,000 tonnes of material per year. The trains are operated by German transport and logistics provider DB Schenker. Site constraints mean the warehouse cannot quite handle a full train in one go and is restricted to 18 out of the 24 wagons. However, Dawson has now taken over management of the Middlesbrough goods rail yard from Network Rail, allowing it to revise the layout for more efficient working. (Incidentally, it also improves service for other yard users – the goods yard hasn’t seen significant investment for 50 years and the site was the original Middlesbrough freight dock for the world-famous Stockton & Darlington railway, even before Middlesbrough itself really existed as a town).

Given that long distance freight train paths are like hen’s teeth in the UK, it behoves every user to make the most of them, and AV Dawson is further increasing the cost effectiveness of train paths by bringing in tar by-products from Tata’s metallurgical coke-making at Port Talbot on intermodal tanks as a feedstock for Teesside chemical industries, all of which helps keep the logistics costs to Tata and NMUK to a minimum.

Quality managementBut along with service level comes quality. There are two potential problems – physical damage, especially to coil ends, and surface finish damage or corrosion from uncontrolled humidity and temperature changes. Dawson has authority to trim damaged coil ends, remove damaged or corroded outer leaves, or even reject a coil entirely. “We are Tata’s last line of defence,” suggests the company’s managing director, Gary Dawson (but Nissan doesn’t pay for steel until it is in production).

Averting physical damage is a question of using appropriate rail and road vehicles, the right sorts of crane and lifting gear, staff training, and attention to detail, such as the condition of dunnage. New dunnage is a not insignificant cost for Dawson, but not an area in which short cuts – literal or metaphorical – are likely to pay off.

Preventing surface corrosion is more difficult, especially given the length of time a coil may be in storage, which is typically around four-and-a-half weeks, rather than the two specified in the contract. Hence the full climate control in the warehouse, which in many ways matches or exceeds the levels for ambient groceries.

Design criteria demand a minimum temperature of 14˚C, and a maximum humidity of 65%. It is not the absolutes that matter so much as changes – bringing cold coil into a hot and humid shop, for example, causes almost instant condensation and corrosion commences. Previous facilities enjoyed dehumidification, but not temperature control. The real innovation lies in how this tight control is achieved economically.

Heat is provided from groundwater bores, and the heat pumps for this are powered by solar panels on the warehouse cladding. Although the facility has not yet been through a full Teesside winter, early indications are that this will create a 40% saving in energy costs over conventional solutions – in this context woodchip firing would be a conventional but ecofriendly solution. These savings when realised will be passed back to Tata and, ultimately, NMUK. Needless to say, this approach also scores on environmental grounds.

On its own this would not meet the criteria without close attention to detail. There are, for example, sophisticated drainage runs to ensure that any rain brought in on rail or road vehicles is immediately removed. The warehouse has fast-acting roller doors (from German manufacturer Efaflex) – rolling up into a spiral trackway, rather than simply around themselves, these are faster and less prone to damage.

Although the primary flow through the warehouse is to NMUK, Dawson is also handling steel supplies to the likes of Unipres UK, a manufacturer of internal structural components, which is co-located with NMUK but also supplies Honda and Renault. Additionally, the warehouse is handling steel plate from a new high quality line at Llanwern for distribution to meet just-in-time slots for Caterpillar UK at its Peterlee, County Durham, factory, where articulated trucks are manufactured. Gary Dawson describes this as “giving an automotive level of service to the yellow goods industry”.