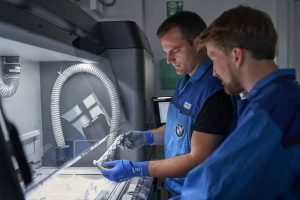 BMW has produced its millionth 3D-printed part since starting to use the manufacturing technology, also known as additive manufacturing, a decade ago. It is one of 200,000 parts the OEM will 3D-print this year – a 42% increase on the number produced last year.

While the number is low compared to the 30m parts the carmaker handles every day and will not have any real impact on inbound material flows, the carmaker said it looked forward to producing more parts directly where they were needed.

A spokesperson for the OEM, which has 3D printers operating across its production network, said 3D printed parts represented a first step towards local part production and pointed toward the production of components in Spartanburg (US), Shenyang (China) and Rayong (Thailand) as examples.

The millionth part produced by 3D printing was a window guide rail destined for a BMW i8 Roadster at the company’s Leipzig plant in Germany.

According to BMW, the guide rail took five days to develop and is now integrated into series production at Leipzig. The part is made by HP Multi Jet Fusion Technology, a high-speed method developed by BMW and Hewlett-Packard and now in use in the series production of vehicles. It can produce up to 100 window guide rails in 24 hours.

“The use of components made by additive manufacturing in series production of vehicles is increasing particularly strongly at the moment,” said Jens Ertel, director of the BMW Group Additive Manufacturing Center. “We are following the development and application of these advanced manufacturing methods very closely indeed, partly through longstanding co-operation with leading manufacturers in the field. At the same time, we are engaging in targeted technology scouting and evaluating innovative production systems.”

According to BMW, this is the second 3D-printed part used on the i8 Roadster – the first being a soft-top attachment made of aluminium alloy that weighs less than the injection-moulded plastic part normally used.

BMW said that since last year, the fixtures for fibre-optic guides in the Rolls-Royce Dawn had also been 3D-printed, and that the luxury brand now incorporated ten 3D-printed components in its products.