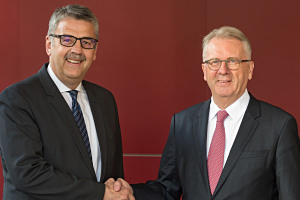 German car brand Borgward and Bremen Invest have signed a deal over the purchase of a future assembly site in the German city.

The memorandum of understanding covers a 140,000 sq.m piece of land in the Cargo Distribution Centre in the western part of Bremen. The price has not been disclosed.

The company first announced its intention to return to Bremen in October last year with plans to initially assemble all-electric and plug-in hybrid models.

During the first stage of construction, the automaker plans to build an SKD/CKD assembly facility for the production of up to 50,000 vehicles per year.

“The objective is to ensure that the SKD/CKD assembly facility can be changed into a full-scale production plant if demand for the vehicles requires,” said Borgward in a statement.

There are also plans to include a test track, a delivery centre and a brand studio.

Construction of the new manufacturing facility is scheduled to start in 2018, with production beginning in 2019.

“The purchase of this site is the next systematic step in our global growth strategy,” said Ulrich Walker, CEO of Borgward.

The carmaker produced around 1.2m Borgward, Lloyd and Goliath brand vehicles from the 1920s through to 1961. Christian Borgward, grandson of original founder Carl Borgward, revived the brand in 2008. The company is financially backed by Beiqi Foton Motor, a subsidiary of China’s BAIC Group.

Borgward has previously announced deals with German suppliers including Continental, Kuka, Schäffler/SKF, BorgWarner, and Webasto. Bosch will also play a role in the production of the all-electric vehicles, while the electronics company LG will supply batteries.