Brunswick increases vehicle handling capacity by 50% in a year 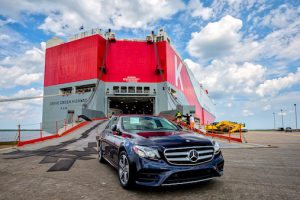 Brunswick port, in the US state of Georgia, has reported an increase in its vehicle handling capacity at the Colonel’s Island terminal of 50% during the last 12 months.

According to the Georgia Ports Authority (GPA), the ro-ro terminal has expanded storage from 60,000 spaces in 2016 to 90,000 spaces today, enabling it to process 800,000 vehicles a year – something that should help deal with the inventory build-up that ports in the US are currently facing as vehicle sales drop off.

According to analyst PwC Autofacts, vehicle inventory levels in the US exceeded 4m units in the middle of this year – the highest since 2005 – with an average 70-day supply across carmakers. Carmakers have made efforts to balance stocks since then.

The additional space developed at Brunswick has been taken up by auto processors Wallenius Wilhelmsen Logistics (WWL) and International Auto Processors, as well as Mercedes-Benz USA’s own vehicle processing unit. The three port customers have increased their operating space by more than 80 hectares, bringing overall vehicle handling space to almost 243 hectares in total.

Last year, combined vehicle handling at the port of Brunswick and the adjacent port of Savannah, which GPA also oversees, came to just over 631,700 units (Savannah handles a small volume of vehicles compared to Brunswick, with just 38,570 processed last year). Their joint annual volume led to the combined port operation being ranked as third amongst the nation’s vehicle handling ports, behind Baltimore and Jacksonville, and GPA executive director Griff Lynch has plans to push Brunswick into top position.

“Growing our infrastructure will allow GPA to better serve the needs of auto processors and manufacturers as they rely more heavily on our terminal to meet customer demand,” Lynch told Chamber of Commerce members assembled at the Jekyll Island Convention Center last month for the annual ‘State of the Port’ address. “This investment puts the Colonel’s Island facility on track to become the nation’s number one auto port.”

The GPA has also been given authority to dredge the Brunswick River to full authorised channel depth of 36 feet in 2018. Lynch said $10.3m in federal funding for maintenance dredging from fiscal 2017 would roll over into the current fiscal year and the proposed budget included another $4.5m for the next fiscal year.

“As the vessels serving the port of Brunswick grow larger, it becomes more important for this port to receive sufficient federal dollars to maintain the channel at its full authorised depth,” said Lynch. “We are happy to report that the upward trend in harbour maintenance funding appears to be continuing into the current fiscal year.”