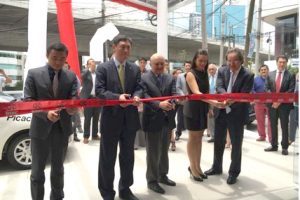 Chinese carmaker BAIC Motor has sold its first exported car in Mexico and revealed plans to build an assembly plant in the country.

The carmaker opened a dealership in Mexico City last month and, according to a report in Automotive News, plans to sell 5,000 vehicles in the country by 2018.

While that number seems modest, BAIC’s move to sell exports there is part of a growing trend among Asian carmakers to export to Mexico. According to the Mexican automotive industry association (AMIA), to June this year vehicle imports to Mexico from Asia reached more than 131,000 – the largest figure per global region by far (NAFTA accounted for 83,700 over the same six-month period). Last year, Asia exported nearly 334,000 vehicles to Mexico.

While Chinese carmakers have promised to build assembly plants there in the past – Zhongxing Automobile said it would have one up and running in 2009 which has yet to appear, for instance – the interest among Chinese carmakers in the Mexican market is on the up and could make a genuine assembly footprint more likely.

That is certainly BAIC’s intent: in a statement, the company said it was committed to building an industrial base in Mexico that would support the production of traditional and “new energy” vehicles as well as automotive parts. BAIC said it also had plans for the aviation and agricultural sectors.

“BAIC will work with local partners to introduce BAIC’s products to Mexico, build a vehicle plant in Mexico to launch BAIC’s new traditional gasoline and electric vehicles [and] create a business platform for international trade,” said the company.

It added that through investment cooperation and brand building it would gradually build Mexico into “a strategic regional centre radiating throughout the Americas”.