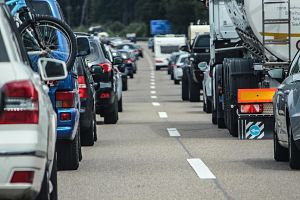 The US trucking industry faced an extra $63.4 billion in operational costs in 2015 due to traffic congestion on the national highway system, new research out this week has suggested.

The latest report by the American Transportation Research Institute (ATRI) used a variety of data sources, including its GPS database, to calculate the delays experienced during the year. The 2015 estimate is $13.9 billion higher than a year earlier.

In total, there were 996m hours of lost productivity, equivalent to 362,243 truck drivers sitting idle for an entire working year, said ATRI.

Distributing this cost across all of the 11.2m registered large trucks in the US results in an average congestion cost per truck of $5,664, compared with an estimate of $4,546 per truck in 2014.

“A five-minute delay for each UPS vehicle every day costs $105m annually in additional operating costs. ATRI’s report quantifies this drain on the economy which must be addressed through targeted infrastructure investments,” he said.

ATRI’s analysis also revealed the states, metropolitan areas and counties that were most impacted by delays and subsequent cost increases. The top 10 states each experienced costs of over $2 billion. Florida and Texas were most impacted, with coss of over $5 billion each.

Urban areas, where traffic congestion tends to be most severe, accounted for 88% of congestion costs, even though they make up only 17% of total road mileage; 91% of the congestion costs came from metropolitan areas, meanwhile.