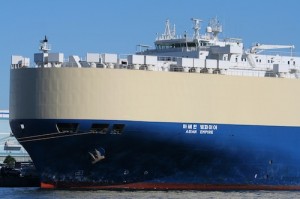 A Eukor car carrier is adrift off the coast of Japan following a fire that caused the crew to abandon the vessel in a lifeboat on Saturday (April 19). All 24 members of the crew are accounted for and in good condition, having been rescued by a merchant vessel, which was in the vicinity when the fire broke out.

The M/V Asian Empire was originally on route between South Korea and Panama but had left its designated course when a fire broke out on the vessel about 480 nautical miles south of Tokyo. The cause of the fire is unknown but the vessel remains afloat and currently there are no signs of flames or smoke.

According to IHS Maritime, the ship left Ulsan on 28 March and was bound for Balboa, Panama, with an estimated arrival date of 21 April. However, data from the maritime analyst reports that at 21.34 GMT on 6 April, Asian Empire slowed down and started heading south with a speed less than 10 knots. Eukor reports that this was caused by a fire and the vessel was rerouted to China. The ship exceeded 15 knots on that journey until a second fire took hold at 17:00 hours last Saturday.

Eukor is awaiting further details on the condition of the vessel and its cargo once salvage crews from Svitzer Salvage have made their report. Two salvage tugs are now with the car carrier.

"The salvage company will henceforth assess her general condition and seaworthiness, before developing a salvage plan based on prevailing condition," said Eukor in a statement.