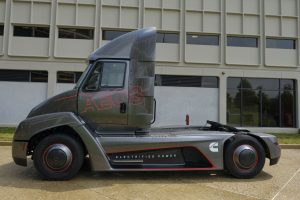 US-based truck engine maker, Cummins, has unveiled a concept fully electric class-7 truck as part of an event at its technical centre in Columbus, Indiana.

Dubbed the AEOS and described as an “urban hauler EV”, the demonstration vehicle hosts a battery pack offering “longer charge for improved range and faster charging”.

According to Forbes, the vehicle has a 100-mile (160km) range. There is also an engine-generator option for extended range capabilities that will be available at a later date.

The news comes ahead of the September launch by Tesla of its own commercial semi-truck, according to a recent Reuters report.

The company also displayed the latest in its “near-zero” natural gas engine technology, “super-efficient” diesel engines (the X12 and X15), and revealed plans to introduce a “revolutionary” heavy-duty diesel engine in 2022.

In December last year Nikola Motor Company, based in the US, unveiled its first hydrogen-electric truck, the Nikola One. The truck runs on high-density lithium batteries. It is said to provide a 1,200-mile (1,920km) range and over 1,000hp of power.