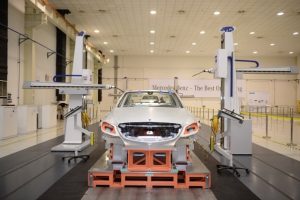 Daimler has signed a framework agreement with its partner BAIC to work together on the development and manufacture of electric vehicles in China, as part of which the German carmaker will take a minority interest in BAIC's subsidiary, Beijing Electric Vehicle Company (BJEV).

The agreement also involves investment in the production facilities at their joint venture Beijing Benz Automotive Company (pictured), paving the way for the introduction of electric vehicle production there.

The deal was signed by officials from the two companies in Berlin in the presence of German Chancellor Angela Merkel and visiting Chinese Premier Li Keqiang.

Last week, Daimler announced that the Mercedes-Benz Rastatt plant in Germany would produce the compact class of its EQ range of electric vehicles, meaning that all three of the company’s German plants will produce electric vehicles, starting with the Bremen plant in 2019.

Said BAIC's chairman, Xu Heyi: “As the forerunner in developing new energy vehicles in China, BAIC’s sales of pure electric vehicles have led the domestic industry. Daimler, too, has rich experience in new energy vehicles, having over the years accumulated advanced technical expertise.”

Hubertus Troska, the Daimler board member responsible for Greater China, said: “China today is already the world’s largest market for new energy vehicles, and Daimler is committed to contributing to the further development of electric mobility in this country.”