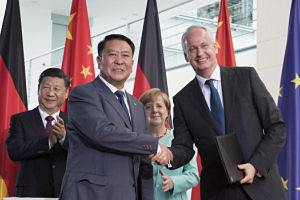 Daimler and its Chinese partner, BAIC, have agreed to invest 5 billion yuan ($735m) in their local production joint venture, Beijing Benz Automotive Company (BBAC), as they prepare it for electric vehicle production from 2020.

The investment will include construction of a battery factory in Beijing – the first the German carmaker will build outside of Germany. The cells will also be sourced locally.

“The local production of batteries is crucial in order to meet the demand for electric vehicles flexibly and efficiently,” said Markus Schäfer, member of the divisional board of Mercedes-Benz Cars, Production and Supply Chain.

In June, Daimler signed a framework agreement with BAIC to work together on the development and manufacture of electric vehicles in China, as part of which the German carmaker took a minority interest in BAIC’s subsidiary, Beijing Electric Vehicle Company (BJEV).

The battery factory will be part of the global battery production network of Mercedes-Benz Cars which already includes the site in Kamenz, Saxony, established in 2010, where a second €500m ($570m) battery factory is currently being built.

In May, the official groundbreaking ceremony for the new plant at Kamenz took place.

Overall, Daimler is investing about €1 billion in the global production of batteries, as it predicts that by 2025 electric vehicles will account for between 15% and 25% of its total unit sales.

Daimler plans to launch more than ten new Mercedes-Benz electric passenger car models by 2022. A total of €10 billion will be invested in the expansion of the electric fleet and the new electric vehicles.

In Germany, the company has already allocated future production of the EQ electric vehicle range to all three of its passenger car plants.

This week, it reported that the Düsseldorf plant, which builds the Mercedes-Benz Sprinter, will also build the electronic version of the light commercial vehicle in future.