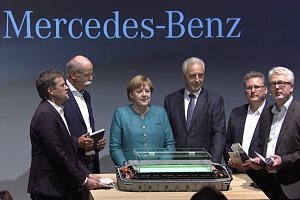 Daimler has held the groundbreaking ceremony for a new €500m ($559m) battery factory in Kamenz, Germany as the company targets the inclusion of more than 10 all-electric passenger cars in its portfolio by 2022.

“The automotive industry is facing a fundamental transformation and we see ourselves as the driving force behind this change,” said Dieter Zetsche, chairman of the board of management of Daimler and head of Mercedes-Benz Cars.

The plant will be the company’s second in the region and forms part of its Accumotive subsidiary. German Chancellor Angela Merkel was in attendance at the event.

The company has produced more than 80,000 batteries to date based on lithium-ion technology, according to Frank Blome, managing director of Accumotive.

The new production facility, which is situated approximately 50km from Dresden, is scheduled to go into operation in mid-2018.

It will quadruple the production and logistics area in Kamenz to a total of around 80,000 sq.m. By the end of the decade, Accumotive will have over 1,000 employees, more than double the number today.

Daimler plans to invest €10 billion in the expansion of its electric vehicle portfolio in the next few years.

The first EQ series model will roll off the line at the Mercedes-Benz plant in Bremen at the end of the decade. In addition to that, luxury-class EQ models will be produced at the plant in Sindelfingen.

The company said it expected electric vehicles to reach 15-25% of total unit sales for Mercedes-Benz by 2025.

Accumotive will also produce batteries for Mercedes-Benz energy storage units and 48-volt-systems, as well as batteries for the company’s commercial vehicles.