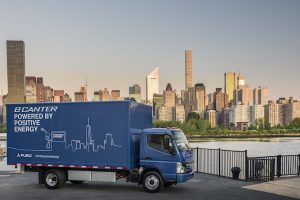 The first vehicles will be delivered to customers in the US, Europe and Japan before the end of the year. The company is planning to produce a total of 500 trucks over the next two years, with larger scale production set to start in 2019.

Production for the European and US markets will take place in Tramagal, Portugal.

The Fuso eCanter has a range of 100km and a load capacity up to 3.5t. The vehicle´s electric powertrain contains six high voltage lithium-ion battery packs with 420 V and 13.8 kWh each.

Marc Llistosella, president and CEO of MFTBC and head of Daimler Trucks Asia said: “In times, when everybody is talking about electric trucks, we are the first to actually commercialise a series produced all-electric truck. Having a long history in alternative drivetrains, we are proud to step into this new era.”

The company started pre-series production on trucks for testing purposes started back in 2014. Customer trials were conducted in Portugal and Germany with these vehicles between 2014 and 2017 and the global launch went ahead last week.

Earlier this year, MFTBC announced Seven-Eleven as its first commercial customer for the new production vehicle in the Japanese market. The supermarket chain will be operating 25 units of the eCanter in their fleet.

At the global launch in New York courier company UPS was named as another trial partner along with four NGO's based in the city.

Carlton Rose, president of global fleet maintenance and engineering at UPS said: “Electric trucks make our fleet both cleaner and quieter, adding to our already more than 8,500 alternative drivetrain vehicles in service today.

A number of companies have recently announced plans to launch all-electric trucks.

Of these the most high-profile is Tesla. Founder and CEO Elon Musk recently tweeted that his company would unveil the vehicle on October 26.

Meanwhile US-based truck engine maker, Cummins, has unveiled a concept fully electric class-7 truck as part of an event at its technical centre in Columbus, Indiana.

Others include Chanje, a California-based medium-duty electric vehicle company and Arrival in the UK which recently started a trial with Royal Mail.