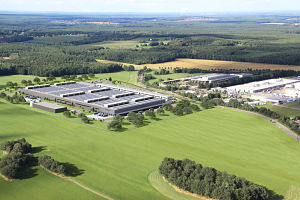 Daimler has started construction of a second lithium-ion battery factory in Kamenz, south-east Germany, which will quadruple the size of the existing production and logistics site to 80,000 sq.m.

Since 2012, the factory at Kamenz, part of Daimler’s Accumotive subsidiary, has been producing lithium-ion batteries for hybrid and electric cars produced by Mercedes-Benz and Smart. This year, production of stationary storage units for home and grid applications also began. It will also produce plug-in batteries in the near future.

By 2025, Daimler plans to have 10 fully electrical passenger cars in its product portfolio. “At the same time, we are continuously pushing our plug-in-hybrid offensive and the introduction of 48-volt systems,” said Dr Thomas Weber, who is responsible for group research and Mercedes-Benz cars development.

At the Paris show last month, Mercedes-Benz launched an electromobility brand called EQ. The EQ electric SUV is expected to start production before the end of the decade and its batteries will be produced in Kamenz.

At the company’s third quarter results announcement last week, Bodo Uebber, the management board member responsible for finance, confirmed that production of the EQ range would be based on Daimler’s existing production network and assembly lines.

Operations at the expanded Kamenz facility are expected to start in the middle of 2018.

“The investment announced at the Paris Motor Show of €1 billion shows that the Kamenz plant is not the last in the world; there will be more in the near future,” said Frank Blome, managing director of Accumotive.

In a presentation at the recent Automotive Logistics UK summit, Philippe Funda, a lead analyst for PwC Autofacts, forecast that by 2030, pure electric vehicles would make up 40% of market share in the top three markets of Europe, North America and China.