Ocean forwarder K Line has confirmed that its ro-ro vessel Makassar Highway, which ran aground off the Swedish coast last week on its way to Sodertalije port in Sweden, has been refloated and is now being towed at a slow speed to Oskarshamn port. 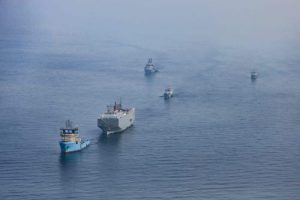 The vessel was carrying vehicles from Cuxhaven port in Germany on a service operated by K Line European Sea Highway Services (Kess) when the incident occurred near Loftahammar at 07:21 on July 23.

All 20 crew members were reported safe following the incident but the vessel sustained heavy damage to the hull and has spilled oil into the ocean. The Swedish Coastguard issued a notice on Tuesday (July 31) stating that oil had reached the shoreline between Loftahammar and Valdemarsvik, and it had closed off the area while a clean-up operation continues.

In a statement K Line said it was working closely with the authorities to minimise the impact of the oil pollution.