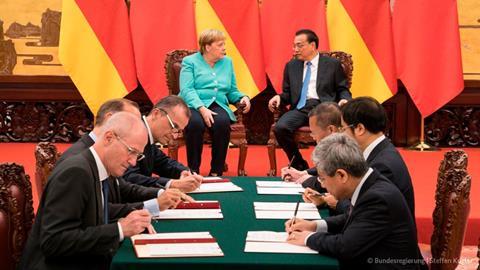 Automotive parts and technology supplier Schaeffler has signed an investment agreement with Hunan province in central China to accelerate the introduction of autonomous driving.

Under the agreement, the German company and local government will jointly develop a mobility ecosystem for intelligent vehicles in the provincial capital of Changsha, based on the company’s Space Drive drive-by-wire technology and Schaeffler Mover vehicle platform.

The establishment of a new company as part of the agreement is “further testimony that Schaeffler’s technologies and products for intelligent vehicles are ideally suited to use in big cities, not least China’s major areas of conurbation,” the technology provider said.

Schaeffler’s CEO automotive OEM Matthias Zink said: “China is a major market for Schaeffler, and we have every confidence that it will continue to grow.”

The formal signing ceremony for the Hunan-Schaeffler agreement was held in Beijing and attended by German Chancellor Angela Merkel and Chinese Premier Li Keqiang.

The company describes Space Drive as a key enabling technology for automated, autonomous and connected vehicles, which is being developed for volume production.

The Schaeffler Mover vehicle platform, known as a rolling chassis, supports a wide range of vehicle concepts and is used to test innovative drive train and chassis technologies.

Schaeffler is also planning to set up a research and development (R&D) centre in Hunan, its second in Greater China, to focus on developing vehicle technology.