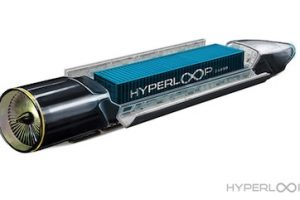 Port terminal giant DP World has signed an agreement with Hyperloop One to explore the use of its high-speed tube propulsion system for the movement of containers between Jebel Ali Port and a new inland container depot in Dubai.

Jebel Ali Port, which is operated by DP World, is the largest marine terminal in the Middle East and has the capacity to handle around 19m TEU containers.

Hyperloop is a solar-powered transport system devised by Elon Musk that aims to transport pods with passengers or freight at extreme speeds – more than 700mph (1,120kph) – inside sealed, low-friction tubes. Hyperloop One is the Los Angeles-based startup company aiming to make the concept a reality.

According to DP World, the initial study will focus on the efficient handling of containers as well as the costs, benefits, demand and volume patterns of moving cargo using the technology. The study will explore the possibility of an offshore, floating Hyperloop to take containers from ships at port directly to an inland hub instead of dock handling and storage.

“At DP World, we continually strive to think ahead and foresee change to create the most efficient, safe and profitable trade solutions,” said Sultan Ahmed Bin Sulayem, chairman and CEO of DP World Group. “With this collaboration we’re leading innovation in our industry once again and, by testing the Hyperloop technology at Jebel Ali for cargo use, we’re taking a first step in exploring new ways of enabling trade and underlining Dubai’s commitment to innovation.”

Bin Sulayem added that the world was changing at a pace not seen before and that DP World intended to be part of “a new revolution in transport” that connected markets and economies around the world.

Hyperloop One CEO Rob Lloyd said the company was pleased to extend its global footprint to the Middle East with the project in the United Arab Emirates (UAE). “This partnership allows us to embrace the innovation of the UAE and to utilise the creativity of DP World, while expanding the variety of use cases for Hyperloop,” he said. “The UAE has taken a leadership role in pushing global transportation solutions to the forefront and we believe that it is the perfect market for Hyperloop.”