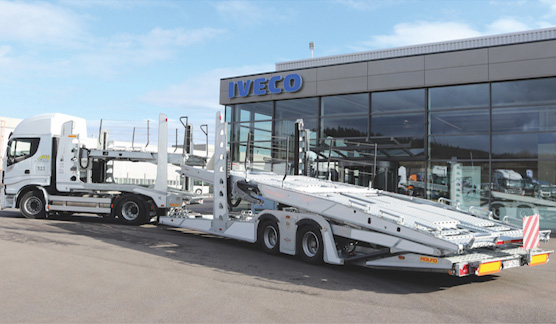 The Iveco Stralis NP truck was handed over in February to the company’s subsidiary AFT H. Altmann Fahrzeugtransporte and is currently being used on an in-house pilot project in southern Germany. The trailer has been supplied by Italian equipment maker Rolfo. Altmann has not disclosed the investment involved.

The company said the vehicle was an alternative to diesel and part of its response to stricter Euro 6 emissions standards, which limit sulphur oxide, nitrogen oxide, CO2 and particulate matter. LNG carriers produce fewer emissions than diesel and make less noise, according to the company – an important consideration for city deliveries.

The Stralis has a 400hp Cursor 9 engine coupled to an automated 12-speed transmission. It can carry the same payload as a comparable diesel-powered vehicle and has a range of approximately 1,500km.

The latest investment follows Altmann’s deployment of an electric truck to move new cars for BMW on a 15km route through Munich in Germany. As reported in December, the electric truck is loaded with vehicles to be handed over to customers at the BMW Welt centre. On the way back from the centre, it transports finished vehicles from the BMW plant, which are later dispatched from the Garching site to the European sales network. The e-truck is used with a covered semi-trailer.

"Sustainability plays an important role in our company,” said Maximillian Altmann, chairman of the board at the company. “For this reason, we addressed this issue at an early stage and defined a corresponding strategy. We have both a purely electric and a gas-powered truck in our repertoire [and] are thus very well positioned in the field of alternative drives.”

Altmann did admit, however, that Germany still had to work on the necessary infrastructure to make the most of the technology and said there had to be legislation to make electric and LNG-powered vehicles more attractive for companies – echoing a point made by Michael Bronsert, head of sales at ARS Altmann, who first referred to the introduction of the LNG truck when speaking to Automotive Logistics about the European road transport market recently.

At last year’s ECG conference in Brussels, Clement Chandon, gas business development manager at Iveco, said it would be supplying 650 LNG trucks for its logistics partners this year in response to demand for a solution to the emissions problem now that would not affect the cost-effectiveness of road haulage in the future.