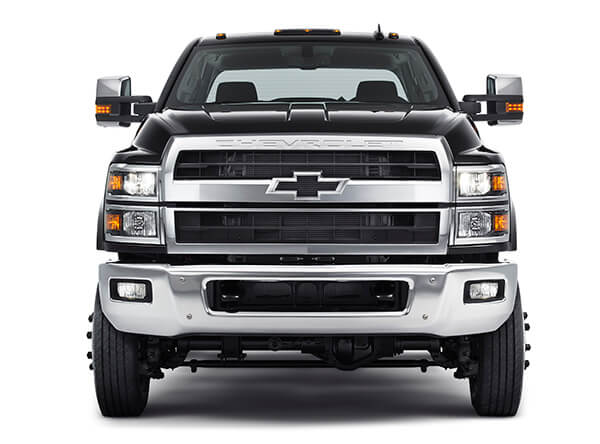 Last year, GM sold around 3m vehicles in the US, with roughly 775,000 imported from Canada and Mexico and the rest coming from around the world, mainly from South Korea, China and Europe. Combining deep-sea and short-sea volumes, the carmaker used seaports to receive close to 200,000 vehicles into the US, and it exported around half that volume to South America, the Middle East and Europe.

However, like other carmakers in North America, there have been some big issues that GM has had (and is continuing) to deal with at ports, mainly related to the ongoing effects of the rail capacity crisis that hit the car industry in North America in 2017.

The lack of available rail capacity for finished vehicles and the problems in getting railcars to the right place at the right time disrupted the outbound supply chain in 2017. Some of this was to do with the ‘precision railroading’ strategy adopted by CSX last year, which suddenly removed 900 locomotives, 60,000 freight cars and 2,300 workers. However, a big factor has been the general lack of bi-level rail cars in the face of a shift in consumer preference from passenger cars (or sedans) to bigger vehicles, including crossovers, SUVs and pickups.

Bigger is better in the US

Back in 2012, US vehicle sales were roughly split 50:50 between passenger cars and light trucks, but the light truck share of overall sales in the US has since risen to 70%, according to figures from PwC Autofacts, and is forecast to continue growing. 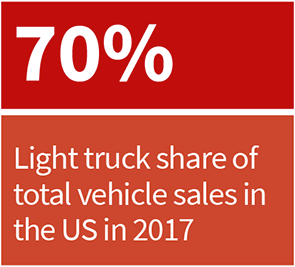 The swing in consumer choice has affected all of the carmakers in North America, including GM. In 2017, it reported selling more pickup trucks in the US than any other automaker – a record 948,909 units. Combined sales of pickups, large vans and SUVs were up 11% in the first half of this year to almost 665,800 and, again, the forecast is for further growth.

This has meant that carmakers, including GM, have an increasing need for bi-level railcars, which are not available in high enough numbers, even though at 47,000 there are almost three times as many bi-level units currently in operation than there are tri-levels.

GM has a strong range of popular crossover and larger SUV models that it needs to move to the dealerships. These include the Buick Encore and Envision, and the Chevrolet Trax and Silverado, among others. The rail companies are responding but the need for significant investment in assets that last 40-50 years – and may become redundant again should the market change – is a predicament.

GM is not alone in using rail heavily. According to the American Association of Railroads (AAR), 75% of the new cars and light trucks sold in the US are moved by rail for the greater part of their journey to dealers. For GM alone that means 2.25m units.

Effects on outbound logisticsThe railcar shortage has had an impact on the other modes of outbound transport. Given the shortages and delays on rail in Mexico, for instance, carmakers have turned to short-sea for shipments out of the country heading north. That has led to high levels of congestion at US ports, which are trying to cope with higher peak short-sea volumes at the same time as dealing with an increase in deep-sea volumes from Asia, as market demand picks up for certain models.

With the sheer level of volume coming into the ports, road hauliers have also been struggling to cope. Many carmakers have turned to truck haulage over greater distances because of the shortage of rail capacity and the need to get volumes out of the ports. But this has compounded the problem as the longer the trucks are away, the less frequently they can get vehicles out of the ports to dealers that are in closer proximity.

As with every carmaker in North America, GM is looking for the ports and port processors that offer the best infrastructure and technology to make throughput efficient and ease congestion. There is a lot of that on offer. For example, with regard to infrastructure to build capacity, Florida’s port of Jacksonville is currently adding 40 hectares of processing and storage space at the Dames Point Marine Terminal to increase overall handling by 25%, equal to a vehicle-handling capacity of 50,000 units within the next three years.

Meanwhile, Baltimore port is developing new land at one of its automotive terminals following the reconstruction of berths at the 233-hectare Dundalk Marine Terminal.

And, as reported in our recent North American ports survey, the US state of Pennsylvania has invested $93m in the port of Philadelphia’s finished vehicle terminal, to more than double annual import capacity there to 350,000 vehicles. The move is part of an overall $300m government investment in infrastructure, warehousing and equipment at the port.

One recent example of the use of new technology was the launch of a communications and yard management upgrade by Pasha Automotive Services late last year.

“Beginning in late 2017 and continuing through 2018, Pasha has re-architected our EDI communications capability with all of our OEMs, in order to lay the foundation for future implementation of a sophisticated yard management solution,” says Brian Mason, vice-president of business development and administration at the company. “The team is currently working through detailed process mapping to support smooth implementation in late 2018 and 2019.”

GM has the potential to use its own in-car telematics technology, OnStar, to improve the process but this remains at a basic level at the moment, not least because of end-user confidentiality issues. GM introduced OnStar in 1995 as driver-assist software that would provide location and status of a vehicle to emergency services in the event of an accident. It also now provides drivers with information on location, fuel levels, tyre pressure, mileage and service scheduling via an app.

The potential to locate the vehicle and get basic status data has obvious advantages for the supply chain, but GM only currently uses it in circumstances where a vehicle cannot be located by other means, or has gone missing. Nevertheless, the potential to use it more comprehensively in the future is something the carmaker is considering in order to provide better visibility at the ports.

More immediately, GM is also helping the delivery process out of the ports and vehicle distribution centres by allowing dealers to pick up vehicles if they are within a suitable proximity. Furthermore, the OEM is also providing accessorisation at certain ports, such as those handling exports to the Middle East, to smooth the flow of throughput and better utilise the time that vehicles may be at the ports.

The future of trade between the US and the rest of the world has been causing carmakers some concern for the last year, notably over import/export tariffs with China and Europe, and the picture there remains unclear. Earlier this year, GM called on the US and China to look for long-term, lasting trade policies in the face of greater tariffs on each other’s goods. At the time of publication, the US had imposed tariffs on $200 billion of goods and China had hit back with $60 billion worth, with threats from both sides of billions still to come.

“We support a positive trade relationship between the US and China, and urge both countries to continue to engage in constructive dialogue and pursue sustainable trade policies,” GM said in a statement. “We continue to believe both countries value a vibrant auto industry and understand the interdependence between the world’s two largest automotive markets.”

GM sold more than 4m vehicles in China last year, up 4.4% from 2016. This year in China, GM and its joint-venture partners plan to introduce 15 new and refreshed models with an emphasis on the SUV, MPV and luxury vehicle segments. It sells under the Baojun, Buick, Cadillac, Chevrolet, Jiefang and Wuling brands in China. GM also exports US-made vehicles to China, including Cadillacs, and imports the Buick Envision SUV and Cadillac CT6 to the US from China.

Meanwhile, questions over trade with Mexico and Canada after a year of North American Free Trade Agreement (Nafta) renegotiation appear to have been answered by an agreement struck with Mexico at the end of August and extended to include Canada at the start of October – though this still had to be passed by Congress at the time of writing.

The new deal calls for 75% of vehicle content to be manufactured in North America in order to avoid an import tariff, an increase from the regional requirement of 62.5% under Nafta. It also requires 40-45% of vehicle content be made by workers earning at least $16 per hour. 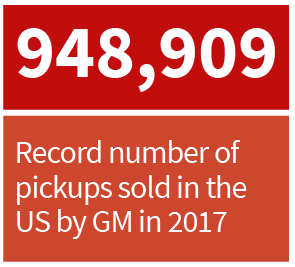 As indicated, there is continued interest for those bigger models in the US. GM posted strong truck sales and what it described as “a wave of new crossovers” for the second quarter of 2018, helping it deliver 758,000 vehicles in the US over that period.

“Customers are buying with confidence because the economy is strong and they expect it to remain strong,” said Kurt McNeil, US vice-president, sales operations. “GM is in a fantastic position with so many new crossovers at all four of our brands, the industry’s only three-truck pickup strategy and clear leadership in large SUVs.”

All it needs now is adequate rail capacity to get those vehicles from the plants to the end customer. 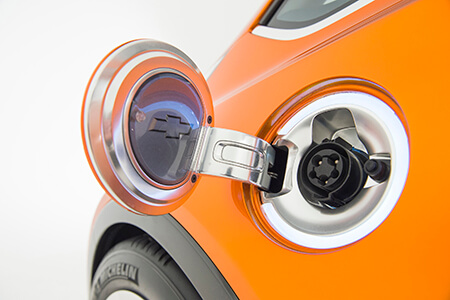 The market trend in the US is toward bigger crossover vehicles driven by combustion engines, and figures from PwC Autofacts indicate that US sales of alternative propulsion vehicles are currently 4% of overall sales (electric vehicles representing 1%) and not likely to account for more than 11% of the global market by 2024. That is compared with the 30% share of the total that China will take, with an equal share taken by the EU.

Despite the poor forecast for take-up in the US, GM remains committed to its goal of bringing at least 20 new all-electric models to market by 2023, and recorded that last year in the US, its alternative propulsion vehicles accounted for nearly a quarter of EV and plug-in sales. According to figures from the US Energy Information Administration, total alternative propulsion vehicle sales in the US last year amounted to 938,000. GM makes the Chevrolet Bolt EV, Chevrolet Volt plug-in hybrid, and Cadillac CT6 Plug-in for the US.

It has recently signed an agreement with Honda for next-generation battery development. The carmakers will collaborate on GM’s battery system and Honda will source the modules from GM for use in its vehicles.

The companies have a manufacturing joint venture to produce an advanced hydrogen fuel cell system around 2020. GM is already shipping the Impera EV to Europe and the Volt EV to South Korea, indicating that work to support EV shipments is underway.