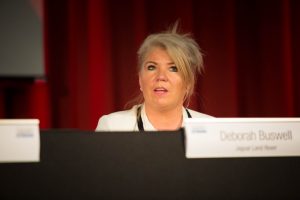 There has been a step change in the way carmakers are looking to work with their outbound transport providers, according to speakers at this week’s Automotive Logistics Europe conference in Bonn, Germany.

The relationship is no longer going to be typified by finished vehicle carriers with poor returns on their investments going out of business thanks to bad contract terms – a situation that has led to the capacity crisis now hampering the European automotive sector as it looks at a return to growth.

Deborah Buswell (pictured), European distribution manager at Jaguar Land Rover, said collaboration with transport providers was crucial to solving the shortage of capacity in the outbound sector. However, she acknowledged the risk providers must take with the amount of investment required, given that so many have gone out of business as a result of poor returns on investment over the last 20 years.

“The demand is there and there are significant capacity issues around Europe, so undoubtedly there needs to be investment,” said Buswell. “What we are saying is that we will share in that risk, by giving the right contracts.”

Buswell was facing criticism over a poor record among OEMs when it came to dealing with providers, as outlined by Thomas Cullen, analyst at Transport Intelligence. He pointed out that calls for investment in the outbound sector, either from transport providers or those outside the sector, was likely to fall on deaf ears.

“The reason you are short of capacity in terms of trucks and road assets is because you put [the transport providers] out of business,” said Cullen. “They couldn’t invest because you didn't allow them a decent return on the asset.”

Cullen asked why any investor would invest if they were likely to go bankrupt.

Buswell reiterated the point that Jaguar Land Rover wanted to encourage investment with a commitment to partnerships.

“We are saying let’s work together so we get capacity and the providers get the confidence that it is the right thing to do,” she said.

Investment in that capacity was also a “terrible necessity” for Hervé Moulin, who oversees vehicle operations, methods, at Renault-Nissan Alliance. The greater risk for transport providers, he suggested, lay in not investing: those investing now would be the ones dominating the market in the near future, as growth in vehicle distribution continued, he suggested.

“There is a strain on our ability to distribute the vehicles we make now,” said Moulin. “In the next few years the market will continue to grow and we will have more vehicles to distribute. The carmakers will need to rely on the providers that can give them the necessary transport volume.”

The level of support required of the industry guaranteed that risks were now reduced when it came to investment, according to Moulin.

“We definitely want to promote the use of providers that can answer our needs,” he said. “We have a growing market all over Europe and it will last several years. The risks associated with investment are limited now.”

Keep in touch with the Automotive Logistics website and our social media feeds for further coverage from the Bonn conference this week.