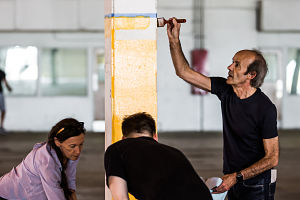 Electric vehicle hopeful Faraday Future (FF), which recently decided to put its $1 billion factory development in Las Vegas on hold, has found an existing facility in Hanford, California that it says will put it on a faster path to production.

The company has already signed the lease for the 1m sq.m facility, located half way between Los Angeles and Silicon Valley, and has begun the process of clean-up to prepare the new site for manufacturing equipment.

According to media reports, the building was originally established in 1962 as an Armstrong Rubber tyre factory. Italian tyre maker Pirelli is said to have acquired it in 1985, before shutting it in 2001.

The current tenant, who has not been named, will move out in November. Faraday said it expected “significant movement to ramp up on site in early 2018”.

“The facility marks another significant step forward for the company in delivering its first production vehicle, FF 91, to market by the end of 2018,” said the company in a statement.

Online publication Business Insider recently cited CFO and former BMW executive Stefan Krause saying the company was seeking $1 billion in funding from investors and that gaining an existing facility was a key element of achieving this. The company’s existing Chinese backers are reportedly experiencing financial difficulties.

Following the latest news about the Hanford plant, the company said: “This new production facility establishes the best path forward for the company’s manufacturing plans and focuses on building out the company’s network of investors to diversify FF’s funding strategy.”

Business Insider also said the company had put up its Los Angeles-area headquarters as collateral to secure a $14m loan to finish vehicle development and get its new California site up and running.

In other news last month, Faraday announced it had hired Ulrich Kranz (pictured, far right) as chief technology officer. Kranz led BMW’s i electric vehicle project, which has launched the i8 and i3 models.