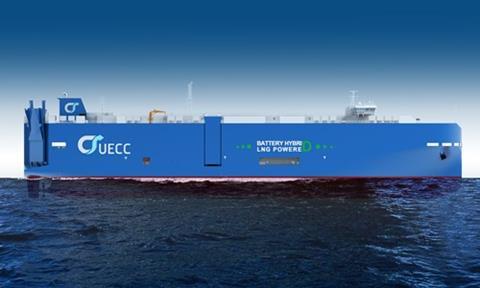 Because the funds are regarded as green financing, UECC is eligible for reductions in borrowing costs, said chief financial officer Thomas Thue.

The company has contracted China Ship Building Trading Company and Jiangnan Shipyard Group to build three new-generation PCTCs. They will be delivered from July 2021.

The battery hybrid LNG-powered vessels will place UECC beyond the International Maritime Organisation’s (IMO) target for a 40% reduction in carbon intensity by 2030 thanks to battery packages being installed, according to CEO Glenn Edvardsen.

“This is a giant leap towards decarbonisation, and unlike anything else that has been done previously in our industry, I believe, and something that we are extremely proud of,” he said.

The vessels will also meet the Tier 3 IMO nitrogen oxygen (NOx) emission limitations coming into force for the Baltic and North Sea from 2021.

As more bio fuels become commercially available, UECC aims to use carbon neutral and synthetic fuels as part of its future fuel mix.

“In our strategy, we take a long-term view and that’s why we are going for a battery hybrid LNG fuel solution,” said Edvardsen.

The three new vessels will each be 169 metres long, 28 metres wide and have a car-carrying capacity of 3,600 vehicles on ten cargo decks. Two of those decks will be hoistable, enabling the ship to accommodate a multitude of high (up to 5.2 metres), heavy and break-bulk mafi cargoes in addition to cars. The PCTCs will each have a quarter ramp with a 160t working load and a side ramp of 20t.

Svenska SkeppsHypotek is a Swedish government agency tasked with facilitating financing of the country’s shipping companies and assisting them renew the merchant fleet.

UECC is jointly owned by Wallenius Lines of Norway, which has a presence in neighbouring Sweden, and Nippon Yusen Kabushiki Kaisha (NYK) of Japan.