Vehicle congestion is reported to be easing at the German port of Bremerhaven following contingency measures taken by resident terminal operator BLG Logistics.

BLG provides all vehicle handling at the port and also provides container logistics services as part of the Eurogate Group. It also handles inland transport by road, rail and inland waterway. 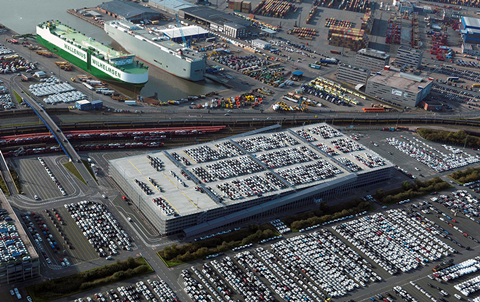 Ro-ro vessels delivering vehicles from China, Japan and South Korea have been delayed for the past few weeks because storage at the port is at maximum capacity and throughput has been affected.

That capacity problem is thanks to a large number of vehicles sitting in port storage awaiting the fitment of final parts, including semiconductors. Combined with volatile vessel scheduling, Bremerhaven was close to its maximum storage capacity of 100,000 vehicles. The increased dwell time has hampered normal operations.

Labour shortages at the port are also affecting throughput and military exercises have also taken up terminal space.

To mitigate the congestion, BLG has moved a percentage of those vehicles offsite to another location until the parts required to finish them are delivered.

Inland capacity
The movement of finished vehicles to and from European ports is also being affected by a reduction of capacity on the road and rail network. That is because of a number of factors.

On the roads there is a shortage of equipment and drivers. The majority of finished vehicle haulage firms reduced capacity to match demand during Covid and are now trying to reinvest in assets at a time when raw material prices are increasing steeply. Estimates by the Association of European Vehicle Logistics points toward a lack of 1,500 trucks, equal to 20% of capacity.

There is also a well-documented crisis in driver recruitment. An already ageing driver pool has been further reduced by many drivers leaving the vehicle haulage sector during the Covid disruption for other sectors. Driver retention and recruitment has also been affected by the war in Ukraine, with drivers from Ukraine returning to fight in the war.

Added to this, many smaller operators that worked as subcontractors have left the finished vehicle logistics market and gone into general haulage.

On rail there has been a reduction in car-carrying wagons as well as traction engines. However, the real issue is infrastructure in Germany. The country is belatedly investing €100 billion ($104 billion) in track maintenance and there are reported to be 1,000 major sites of construction, meaning track closures and diversions. The work on the German rail freight network is expected to take 10 years to complete.