Ford and Deutsche Post team up on larger electric van 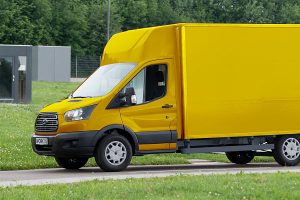 Deutsche Post is to use the Ford Transit chassis as the basis for a new all-electric van to be built at the logistics company’s existing StreetScooter manufacturing plant in Aachen, Germany.

Last November, Deutsche Post said that due to strong customer demand, it would be increasing production of its StreetScooter brand of electric delivery vehicles from 10,000 to as many as 20,000 by the end of the year. It also commissioned another production location in North Rhine-Westphalia.

Today, there are 2,500 StreetScooters in use by Deutsche Post throughout Germany.

“Deutsche Post has already left its mark in the smaller van segment by designing and producing the emission-free StreetScooter. Now, both partners are working on a larger vehicle type,” said a statement announcing the deal with Ford.

The chassis of the Ford Transit will be equipped with a battery-electric drivetrain and fitted with a special body based on Deutsche Post and DHL Paket specifications.

The start of production is scheduled for July 2017 and before the end of next year, at least 2,500 vehicles will be in use by Deutsche Post’s DHL Group.

“With this volume, the joint project will become the largest manufacturer of battery-electric medium-duty delivery vehicles in Europe,” said the company.

Back in November, Deutsche Post told Automotive Logistics it had decided to build its own electric delivery vehicles because “conventional vehicle producers turned down requests to build the electric vans in what are limited numbers by their standards”.