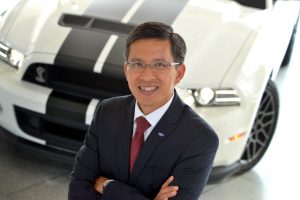 Ford has announced a swathe of further global leadership changes, just days after Jim Hackett was named as the carmaker’s new president and CEO.

The changes have also been made to support the newly appointed leaders of the revamped organisational structure, which includes global markets, global operations and mobility.

Hau Thai-Tang (pictured) has been appointed as the vice-president for product development and purchasing.

Thai-Tang has been global head of purchasing since August 2013 and before that was involved in product development for 25 years. His new role will combine both organisations from June 1st.

Ford’s global purchasing organisation is responsible for more than $100 billion in annual spending on production and non-production goods and services around the world. Thai-Tang will report to Joe Hinrichs, who was recently appointed to lead global operations.

From a global markets perspective, Raj Nair has been named to lead Ford North America, while Steven Armstrong will lead Ford of Europe, Middle East & Africa, and Peter Fleet is to lead Ford Asia Pacific.

Dave Schoch, a 40-year company veteran and head of Asia Pacific for the past five years, has decided to retire at the age of 66. He served in a variety of positions over the years, including controller for the Americas region, executive director, Ford Canada, Mexico and South America, and chief financial officer and vice-president of strategic planning for Europe.

“Dave has been a fantastic leader and a role model for many at Ford during his four decades in the company,” said Hackett. “Over the past five years, Dave has been a key architect of our tremendous growth in China and overall success in Asia Pacific.”

His replacement, Fleet, was previously vice-president, marketing, sales and service, Asia Pacific. He will take over from July 1st.

These new regional leaders will all report to Jim Farley, who was last week named as the new head of global markets.

Another notable appointment was that of Sherif Marakby, who rejoins the company having spent a year at Silicon Valley-based online cab-hailing company Uber as its vice-president for global vehicle programs.

Marakby has an extensive background in electrification, having previously led the Ford team to deliver a battery-electric vehicle, plug-in hybrid vehicles, and hybrid-electric vehicles. He will also report to Farley.