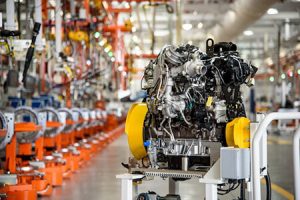 Ford is adding an assembly line at its Struandale plant in South Africa to produce engines for the Ford Ranger Raptor. The mid-size pick-up will go into production next year at the carmaker’s Silverton assembly plant in Pretoria, as well as at its plant in Rayong, Thailand, both of which will be supplied with the new diesel engine from the Struandale plant.

The assembly hall is located in a refurbished 3,868 sq.m section of the plant and has an annual capacity of 120,000 engines. Ford said it would use the latest manufacturing processes to meet high standards of workmanship, product quality and performance there. Eight versions of the new engine will be assembled on the line when production starts in the fourth quarter of this year.

Ford is also increasing capacity at Struandale for the current Duratorq TDCi engine, which powers its Ford Ranger and Everest models. The carmaker has increased the number of markets to which it exports these vehicles to include Italy, Turkey and Russia, bringing the total number of export markets in the Europe, Middle East and Africa region to 148.

In a statement, the carmaker said installed capacity for the Duratorq TDCi programme was set to increase from the current 254,000 machined component sets (including cylinder head, block and crankshaft) to 280,000. At the same time, assembly capacity will grow from 115,000 to 130,000 engines per annum.

In December 2017, the Struandale plant assembled its 500,000th Duratorq TDCi turbodiesel engine since production of it began in 2011, taking the total number of engines produced at the Port Elizabeth plant to 3.3m units.

The investment at Struandale is part of an overall three billion rand production expansion in South Africa that was announced in November last year. Ford has decline to provide any detailed breakdown of that expenditure.

The company said Struandale would eventually become the home of all Duratorq TDCi engine component machining for the Ranger, Everest and Transit, along with expanded engine assembly in conjunction with current operations at Ford plants in Thailand and Argentina.