Ford invests in Valencia for next generation Kuga 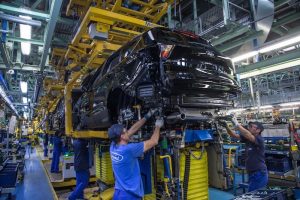 Ford is investing €750m ($880m) in its Valencia assembly plant in Spain to build the next generation of its Kuga SUV.

The carmaker has been making the Kuga there since 2013, alongside the full range of Mondeo, S-Max and Galaxy models, as well as the Tourneo Connect and Transit Connect light commercial vehicles, all of which are exclusive to the plant.

Ford would not share current output figures for the Kuga from Valencia but sales are currently at 126,900 and account for close to 50% of the volume coming out of the facility. Production of the new generation will start in 2018.

The latest investment in the Valencia plant, located at Almussafes, brings the amount Ford has sunk into the facility since 2011 to €3 billion.

“This major investment of more than €750m reconfirms in the clearest way our continuing commitment to the Valencia region and to Spain as one of our most important manufacturing locations in Europe,” said Steven Armstrong, president and CEO, Ford of Europe, Middle East and Africa.

When Ford consolidated production at the Valencia plant between 2011 and 2014, it invested €2.3 billion in doing so, which at the time was the biggest investment in the history of Spain’s car industry. Installed capacity at the plant is for 450,000 vehicles a year and the plant exports 90% of its production to as many as 75 countries around the world. The carmaker has its own terminal at nearby Valencia port, which covers an area of 150,000 sq.m and makes it one of its main European hubs.

Ford has increased sales of the Kuga this year by 22% on the same period last year. It is the carmaker’s third best-selling model behind the Fiesta and Focus.